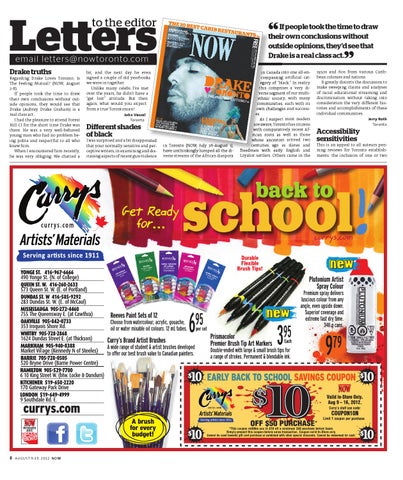 “ If people took the time to draw their own conclusions without outside opinions, they’d see that Drake is a real class act.”

Regarding Drake Loves Toronto; Is The Feeling Mutual? (NOW, August 2-8). If people took the time to draw their own conclusions without outside opinions, they would see that Drake (Aubrey Drake Graham) is a real class act. I had the pleasure to attend Forest Hill CI for the short time Drake was there. He was a very well-behaved young man who had no problem being polite and respectful to all who knew him. When I encountered him recently, he was very obliging. We chatted a

bit, and the next day he even signed a couple of old yearbooks we were in together. Unlike many celebs I’ve met over the years, he didn’t have a “get lost” attitude. But then again, what would you expect from a true Torontonian? John Vassal Toronto

I was surprised and a bit disappointed that your normally sensitive and perceptive writers, in examining and discussing aspects of recent gun violence

in Toronto (NOW, July 26-August 1), have unthinkingly lumped all the diverse streams of the African diaspora

in Canada into one all-encompassing artificial category of “black.” In reality this comprises a very diverse segment of our multiethnic society, with many communities, each with its own challenges and successes. As I suspect most readers are aware, Toronto has citizens with comparatively recent African roots as well as those whose ancestors arrived two centuries ago as slaves and freedmen with early English and Loyalist settlers. Others came in the

1950s and 60s from various Caribbean colonies and nations. It greatly distorts the discussion to make sweeping claims and analyses of racial educational streaming and discrimination without taking into consideration the very different histories and accomplishments of these individual communities. Jerry Roth Toronto

This is an appeal to all auteurs penning reviews for Toronto establishments: the inclusion of one or two