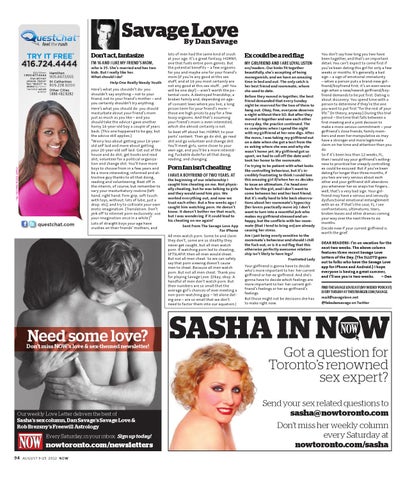 ers/readers. Our kinks fit together beautifully, she’s accepting of being monogamish, and we have an amazing time in bed and out. The only catch is her best friend and roommate, whom she used to date. Before they moved in together, the best friend demanded that every Sunday night be reserved for the two of them to hang out. Okay, fine, everyone deserves a night without their SO. But after they moved in together and saw each other every day, the practice continued. The ex complains when I spend the night with my girlfriend at her new digs. After the move, I was taking my girlfriend out on a date when she got a text from the ex asking where she was and why she wasn’t home yet. My girlfriend got so upset, we had to call off the date and I took her home to the roommate. I’m trying to be patient with what looks like controlling behaviour, but it’s incredibly frustrating to think I could lose this amazing girl if/when her ex decides to issue an ultimatum. I’m head over heels for this girl, and I don’t want to come between her and her best friend. But it’s really hard to bite back observations about her roommate’s hypocrisy (her lovers practically move in). I don’t want to turn into a resentful jerk who makes my girlfriend stressed and unhappy, but the conflicts with her roommate (that I tend to bring on) are already causing her stress. Am I just being overly sensitive to the roommate’s behaviour and should I chill the fuck out, or is it a red flag that this otherwise perfectly awesome relationship isn’t likely to have legs? Frustrated Lady Your girlfriend is gonna have to decide who’s more important to her: her current girlfriend or her ex-girlfriend. And she’s gonna have to decide which feelings are more important to her: her current girlfriend’s feelings or her ex-girlfriend’s feelings. But those might not be decisions she has to make right now.

You don’t say how long you two have been together, and that’s an important detail. You can’t expect to come first if you’ve been dating this girl for only a few weeks or months. It’s generally a bad sign – a sign of emotional immaturity – when a person puts a brand-new girlfriend/boyfriend first; it’s an even worse sign when a new/newish girlfriend/boyfriend demands to be put first. Dating is about discovery: You spend time with a person to determine if they’re the one you want to put first “for the rest of your life.” (In theory, anyway.) During this trial period – the time that falls between a first meeting and a joint decision to make a more serious commitment – your girlfriend’s close friends, family members and even her manipulative ex may have a stronger and more legitimate claim on her time and attention than you do. So if it’s been less than 12 weeks, FL, then I would say your girlfriend’s willingness to prioritize her creepily controlling ex could be excused. But if you’ve been dating for longer than three months, if you two are very serious about each other and your girlfriend still abandons you whenever her ex snaps her fingers… well, that’s a very bad sign. Your girlfriend may have a serious and seriously dysfunctional emotional entanglement with an ex. If that’s the case, FL, I see confrontations, ultimatums, tears, broken leases and other dramas coming your way over the next three to six months. Decide now if your current girlfriend is worth the grief.

DEAR READERS: I’m on vacation for the next two weeks. The above column features three recent Savage Love Letters of the Day. (The SLLOTD goes out to folks who have the Savage Love app for iPhone and Android.) I hope everyone is having a great summer, and I’ll see you in two weeks. – Dan fInd the savage lovecast (my weekly podcast) every tuesday at thestranger.com/savage. mail@savagelove.net @fakedansavage on Twitter

sasha in now Got a question for Toronto’s renowned sex expert?

Send your sex related questions to sasha@nowtoronto.com Don’t miss her weekly column every Saturday at nowtoronto.com/sasha