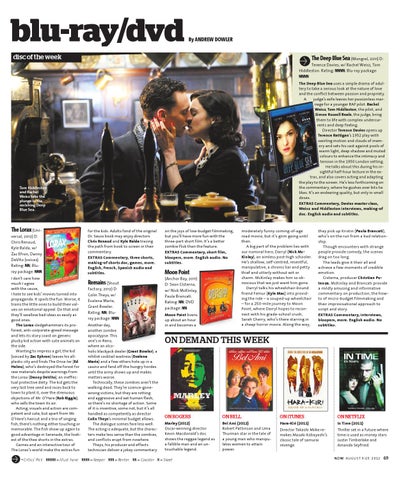 disc of the week

(Mongrel, 2011) D: Terence Davies, w/ Rachel Weisz, Tom Hiddleston. Rating: NNNN; Blu-ray package: NNNN The Deep Blue Sea uses a simple drama of adultery to take a serious look at the nature of love and the conflict between passion and propriety. A judge’s wife leaves her passionless marriage for a younger RAF pilot. Rachel Weisz, Tom Hiddleston, the pilot, and Simon Russell Beale, the judge, bring them to life with complex undercurrents and deep feeling. Director Terence Davies opens up Terence Rattigan’s 1952 play with swirling motion and clouds of memory and sets his cast against pools of warm light, deep shadow and muted colours to enhance the intimacy and tension in the 1950 London setting. He talks about this during his insightful half-hour lecture in the extras, and also covers acting and adapting the play to the screen. He’s less forthcoming on the commentary, where he gushes over bits he likes. It’s an endearing quality, but only in small doses. EXTRAS Commentary, Davies master class, Weisz and Hiddleston interviews, making-of doc. English audio and subtitles.

versal, 2012) D: Chris Renaud, Kyle Balda, w/ Zac Efron, Danny DeVito (voices). Rating: NN; Bluray package: NNN I don’t care how much I agree with the cause, I hate to see kids’ movies turned into propaganda. It spoils the fun. Worse, it trains the little ones to build their values on emotional appeal. Do that and they’ll swallow bad ideas as easily as good ones. The Lorax sledgehammers its proforest, anti-corporate-greed message and lets its story coast on generic plucky kid action with cute animals on the side. Wanting to impress a girl, the kid (voiced by Zac Ephron) leaves his allplastic city and finds The Once-ler (Ed Helms), who’s destroyed the forest for raw materials despite warnings from the Lorax (Danny DeVito), an ineffectual protective deity. The kid gets the very last tree seed and races back to town to plant it, over the strenuous objections of Mr. O’Hare (Rob Riggle), who sells the town its air. Acting, visuals and action are competent and cute, but apart from Mr. O’Hare’s haircut and a trio of singing fish, there’s nothing either touching or memorable. The fish show up again to good advantage in Serenade, the liveliest of the thee shorts in the extras. Games and an interactive tour of The Lorax’s world make the extras fun

Another day, another zombie apocalypse. This one’s in Reno, where an alcoholic blackjack dealer (Grant Bowler), a nihilist cocktail waitress (Evalena Marie) and a few others hole up in a casino and fend off the hungry hordes until the army shows up and makes matters worse. Technically, these zombies aren’t the walking dead. They’re science-gonewrong victims, but they are rotting and aggressive and eat human flesh, so there’s no shortage of action. Some of it is inventive, some not, but it’s all handled as competently as director Colin Theys’s minimal budget allows. The dialogue scenes fare less well. The acting is adequate, but the characters make less sense than the zombies, and conflicts erupt from nowhere. Theys, his producer and effects technician deliver a jokey commentary

on the joys of low-budget filmmaking, but you’ll have more fun with the three-part short film. It’s a better zombie flick than the feature. EXTRAS Commentary, short film, bloopers, more. English audio. No subtitles.

moderately funny coming-of-age road movie, but it’s grim going until then. A big part of the problem lies with our nominal hero, Darryl (Nick McKinlay), an aimless post-high schooler. He’s shallow, self-centred, resentful, manipulative, a chronic liar and petty thief and utterly without wit or charm. McKinlay makes him so obnoxious that we just want him gone. Darryl talks his wheelchair-bound friend Femur (Kyle Mac) into providing the ride – a souped-up wheelchair – for a 250-mile journey to Moon Point, where Darryl hopes to reconnect with his grade-school crush, Sarah Cherry, who’s there starring in a cheap horror movie. Along the way,

they pick up Kristin (Paula Brancati), who’s on the run from a bad relationship. Though encounters with strange people provide comedy, the scenes drag on too long. The leads give it their all and achieve a few moments of credible emotion. Cisterna, producer Christian Potenza, McKinlay and Brancati provide a mildly amusing and informative commentary on production, the howto of micro-budget filmmaking and their improvisational approach to script and story. EXTRAS Commentary, interviews, bloopers, more. English audio. No subtitles.

ON DEMAND THIS WEEK

Bel Ami (2012) Robert Pattinson and Uma Thurman star in the tale of a young man who manipulates women to attain power.

In Time (2011) Thriller set in a future where time is used as money stars Justin Timberlake and Amanda Seyfried.