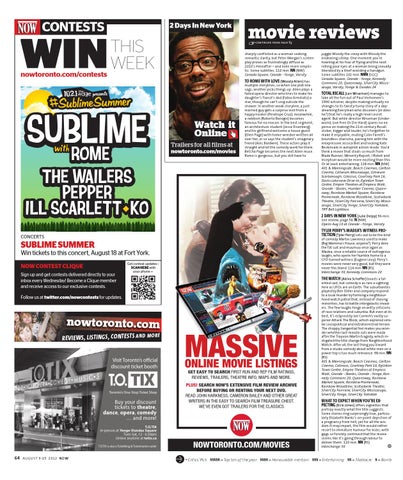 Watch it Online Trailers for all films at

TO ROME WITH LOVE (Woody Allen) has multiple storylines, so when one plot line sags, another picks things up. Allen plays a failed opera director who tries to make his daughter’s fiancé’s dad (Fabio Armiliato) a star, though he can’t sing outside the shower. In another weak storyline, a justmarried guy gets a surprise visit from a happy hooker (Penélope Cruz); meanwhile, a nebbish (Roberto Benigni) becomes famous for no reason. In the best segment, an architecture student (Jesse Eisenberg) and his girlfriend welcome a house guest (Ellen Page) with home-wrecker written all over her, or so says the student’s imaginary friend (Alec Baldwin). These actors play it straight and let the comedy work for them. Betcha Page becomes the next Allen muse. Rome is gorgeous, but you still have to

of comedy Martin Lawrence used to make (Big Momma’s House, anyone?). Perry dons the fat suit and muumuu once again as Madea, once a reliable source of outrageous laughs, who opens her humble home to a CFO-turned-witness (Eugene Levy). Perry’s movies were never very good, but they were never this bland. 114 min. NN (RS) Interchange 30, Kennedy Commons 20

GET EASY TO SEARCH FIRST RUN AND REP FILM RATINGS, REVIEWS, TRAILERS, THEATRE INFO, MAPS AND MORE. PLUS! SEARCH NOW’S EXTENSIVE FILM REVIEW ARCHIVE BEFORE BUYING OR RENTING YOUR NEXT DVD. READ JOHN HARKNESS, CAMERON BAILEY AND OTHER GREAT WRITERS IN THE EASY TO SEARCH FILM TREASURE CHEST. WE’VE EVEN GOT TRAILERS FOR THE CLASSICS

juggle Woody the creep with Woody the endearing schlep. One moment you’re howling at his fear of flying and the next rolling your eyes at a woman being sexually liberated by a thief wielding a handgun. Some subtitles 102 min. NNN (SGC) Canada Square, Grande - Yonge, Kennedy Commons 20, Queensway, SilverCity Mississauga, Varsity, Yonge &amp; Dundas 24

ented cast, but comedy is as rare a sighting here as UFOs are on Earth. The suburbanites played by Ben Stiller and company respond to a local murder by forming a neighbourhood watch patrol that, instead of chasing minorities, has to battle intergalactic invaders. The few laughs hinge on witty criticisms of race relations and suburbia. But even at its best, it’s eclipsed by Joe Cornish’s vastly superior Attack The Block, which explored similar sociopolitical and extraterrestrial terrain. The choppy, tangential feel makes you wonder whether last-minute cuts were made after the Trayvon Martin tragedy, which instigated the title change from Neighborhood Watch. After all, the last thing you’d want from a studio comedy about white men on a power trip is too much relevance. 98 min. NN (RS) 401 &amp; Morningside, Beach Cinemas, Carlton Cinema, Colossus, Courtney Park 16, Eglinton Town Centre, Empire Theatres at Empress Walk, Grande - Steeles, Grande - Yonge, Kennedy Commons 20, Queensway, Rainbow Market Square, Rainbow Promenade, Rainbow Woodbine, Scotiabank Theatre, SilverCity Fairview, SilverCity Mississauga, SilverCity Yonge, SilverCity Yorkdale

portray exactly what the title suggests. Some stories ring surprisingly true, particularly Elizabeth Banks’s on-point depiction of a pregnancy from hell, yet for all the wisdom it may impart, the film would rather resort to immature humour for kicks, with gags so forcibly contrived that the movie seems like it’s going through labour to deliver them. 110 min. NN (RS) Interchange 30 3