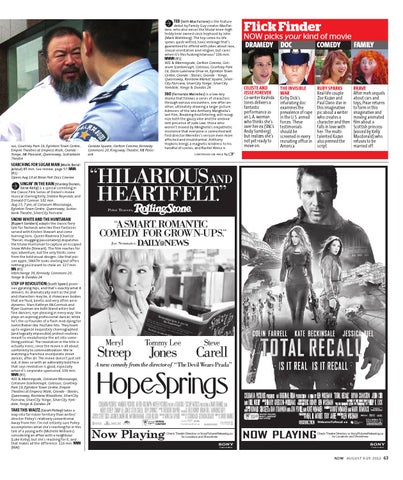 360 (Fernando Meirelles) is a low-key

SINGIN’ IN THE RAIN (Stanley Donen,

SNOW WHITE AND THE HUNTSMAN

(Rupert Sanders) adapts the classic fairy tale for Twihards who like their fantasies served with Kristen Stewart and some burning loins. Queen Ravenna (Charlize Theron, mugging passionately) dispatches the titular Huntsman to capture an escaped Snow White (Stewart). The film reaches for epic adventure, but the only thrills come from the bold visual designs. Like that poison apple, SWATH looks inviting but offers nothing you’d want to chew on. 127 min. NN (RS) Interchange 30, Kennedy Commons 20, Yonge &amp; Dundas 24

drama that follows a series of characters through various encounters, one after another, ultimately drawing a larger picture. Admirers of the late Anthony Minghella’s last film, Breaking And Entering, will recognize both the gauzy vibe and the ambivalent presence of Jude Law; those who weren’t moved by Minghella’s empathetic insistence that everyone is connected will find director Meirelles’s version even more affected and insubstantial. Anthony Hopkins brings a magnetic kindness to his handful of scenes, and Rachel Weisz is

Co-writer Rashida Jones delivers a fantastic performance as an L.A. woman who thinks she’s over her ex (SNL’s Andy Samberg) but realizes she’s not yet ready to move on.

Real-life couple Zoe Kazan and Kirby Dick’s Paul Dano star in infuriating doc this imaginative examines the prevalence of rape pic about a writer in the U.S. armed who creates a character and then forces. These falls in love with testimonials her. The multishould be screened in every talented Kazan recruiting ofﬁce in also penned the script. America.

After meh sequels about cars and toys, Pixar returns to form in this imaginative and moving animated ﬁlm about a Scottish princess (voiced by Kelly Macdonald) who refuses to be married off.

STEP UP REVOLUTION (Scott Speer) promises gyrating hips, and that’s exactly what it delivers. As dramatically inert as the plot and characters may be, it showcases bodies that are fluid, kinetic and very often aerodynamic. Stars Kathryn McCormick and Ryan Guzman are both bland actors but fine dancers, eye-pleasing in every way. She plays an aspiring professional dancer, while he’s the co-founder of a flash mob dying for Justin Bieber-like YouTube hits. They team up to organize exquisitely choreographed (and logically impossible) protest routines meant to revolutionize the art into something political. The revolution in the title is actually ironic, since the movie is all about conformity to commoditization. We’re watching a franchise incorporate street dances, after all. The movie doesn’t just sell out, it does so with an admirably bold face that says revolution is good, especially when it’s corporate-sponsored. 106 min. NNN (RS) 401 &amp; Morningside, Coliseum Mississauga, Coliseum Scarborough, Colossus, Courtney Park 16, Eglinton Town Centre, Empire Theatres at Empress Walk, Grande - Steeles, Queensway, Rainbow Woodbine, SilverCity Fairview, SilverCity Yonge, SilverCity Yorkdale, Yonge &amp; Dundas 24 TAKE THIS WALTZ (Sarah Polley) takes a leap into far riskier territory than writer/ director Polley’s relatively conventional Away From Her. I’m not entirely sure Polley accomplishes what she’s reaching for in this tale of a young wife (Michelle Williams) considering an affair with a neighbour (Luke Kirby), but she’s reaching for it, and that makes all the difference. 116 min. NNN (NW)

Check Theatre Directory or SonyPicturesReleasing.ca for Locations and Showtimes

Check Theatre Directory or SonyPicturesReleasing.ca for Locations and Showtimes