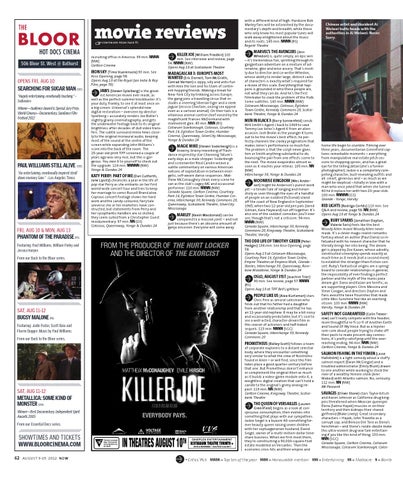 (Steven Spielberg) is the greatest American movie ever made, as well as the perfect summer blockbuster. It’s your duty, frankly, to see it at least once on a big screen. Universal’s splendid new digital restoration – overseen by director Spielberg – accurately renders Joe Butler’s slightly grainy cinematography, and gets the underwater footage back to its original brightness after decades of dull video transfers. The subtle surround remix hews closely to the original monaural audio, keeping most of the sound at the centre of the screen while expanding John Williams’s score into the back of the room. The 15-year-old print TIFF screened a couple of years ago was very nice, but this is gorgeous. You owe it to yourself to check out the upgrade. 124 min. NNNNN (NW) Yonge &amp; Dundas 24

Jane Lipsitz) chronicles a year in the life of pop star Perry as she embarks on her first world-wide concert tour and tries to keep her marriage to comic Russell Brand alive. Copious concert footage shows her hard work and the candy-coloured, fairy tale universe she or her marketers have constructed, but statements from Perry and her sycophantic handlers are so clichéd, they seem culled from a Christopher Guest mockumentary. 97 min. NN (GS) Colossus, Queensway, Yonge &amp; Dundas 24

(Kevin Macdonald) can be compared to a massive joint – and not just because there’s an obscene amount of ganja onscreen. Everyone will come away

PHANTOM OF THE PARADISE (PG) Featuring: Paul Williams, William Finley and Jessica Harper. From our Back to the Bloor series.

with a different kind of high. Hardcore Bob Marley fans will be astonished by the documentary’s depth and breadth, while those who only know his most popular tunes will walk away enlightened about the music and its roots. 145 min. NNNN (RS) Regent Theatre

Marvel’S the aveNgerS (Joss Whedon) is, quite simply, an epic win – it’s tremendous fun, sprinting through its gargantuan adventure on a mixture of adrenaline, glee and wise-assery. That’s mostly due to director and co-writer Whedon, whose ability to render large, distinct casts of characters is exactly what’s required for a movie of this scale. Everything that happens is grounded in who these people are, not what they can do. And he’s the first filmmaker to crack the problem of the Hulk. Some subtitles. 143 min. NNNN (NW) Coliseum Mississauga, Colossus, Eglinton Town Centre, Kennedy Commons 20, Scotiabank Theatre, Yonge &amp; Dundas 24

Will Smith’s Agent J back to 1969 to save Tommy Lee Jones’s Agent K from an alien assassin. Josh Brolin as the younger K turns out to be the movie’s best effect; he perfectly channels the cranky pragmatism that makes Jones’s performance so much fun. The problem is that the script never gives him or Smith anything substantial to do, bouncing the pair from one effects scene to the next. The movie evaporates almost as soon as it reaches your retinas. 105 min. NN (NW) Interchange 30, Yonge &amp; Dundas 24

(Wes Anderson) might be Anderson’s purest work yet – a tender tale of longing and melancholy as seen through the eyes of a handful of people on an isolated (fictional) island off the coast of New England in September 1965, when two 12-year-old pen pals (Jared Gilman, Kara Hayward) run off together. It’s also one of the saddest comedies you’ll ever see, though that’s not a criticism. 94 min. NNNN (NW) Canada Square, Interchange 30, Kennedy Commons 20, Kingsway Theatre, Scotiabank Theatre, Varsity

(Alex Kurtzman) stars Chris Pine as amoral salesman who finds out that his father had a daughter from another relationship and that he has an 11-year-old nephew. It may be a bit noisy and occasionally predictable, but it’s cool to see a well-acted, character-driven film in this season of actioners and half-baked sequels. 115 min. NNNN (SGC) Canada Square, Interchange 30, Kennedy Commons 20

BUGSY MALONE (PG) Featuring: Jodie Foster, Scott Baio and Florrie Dugger. Music by Paul Williams. From our Back to the Bloor series.

ProMetheuS (Ridley Scott) follows a team of corporate explorers to a distant celestial body, where they encounter something very similar to what the crew of Nostromo found in Alien – or will find, since this film takes place a good quarter-century before that one. But Prometheus doesn’t enhance or complement the original Alien as much as it builds a video-game module onto it, a weightless digital creation that can’t hold a candle to the original’s grimy analog impact. 119 min. NN (NW) Carlton Cinema, Kingsway Theatre, Scotiabank Theatre

METALLICA: SOME KIND OF MONSTER (14A)

From our Essential Docs series.

the QueeN of verSaIlleS (Lauren Greenfield) begins as a look at conspicuous consumption, then evolves into something that plays with our sympathies. Jackie Siegel is a buxom 40-something former beauty queen raising seven children with her septuagenarian husband, David Siegel, owner of a multi-million-dollar timeshare business. When we first meet them, they’re constructing a 90,000-square-foot estate modelled on Versailles. Then the economic crisis hits and their empire and

a film by William friedkin

home life begin to crumble. Filming over three years, documentarian Greenfield captures remarkable moments – everything from manipulative real estate pitch sessions to shopping sprees, and has a great eye for the telling detail (she’s a former photographer). Jackie is a completely compelling character, bust-revealing outfits and all: smart, generous and – as much as we might be skeptical – totally in love with a man who once joked that when she turned 40 he’d replace her with two 20-year-olds. 100 min. NNNNN (GS) Grande - Yonge, Varsity

red lIghtS (Rodrigo Cortés) 113 min. See Q&amp;A and review, page 58. NN (NW) Opens Aug 10 at Yonge &amp; Dundas 24 ruBy SParkS (Jonathan Dayton, Valerie Faris) feels like the best Woody Allen movie Woody Allen never made. It’s a clever magic-realist romantic fantasy about an author (Paul Dano) so infatuated with his newest character that he literally brings her into being. The dream girl is played by Zoe Kazan, whose adroitly constructed screenplay spends exactly as much time as it needs (not a second more) to establish the stranger-than-fiction conceit. Ruby’s fantastical origins are a springboard to consider relationships in general, the impossibility of ever finding a perfect partner and the myth of the manic pixie dream girl. Dano and Kazan are terrific, as are supporting players Chris Messina and Steve Coogan, and directors Dayton and Faris avoid the twee flourishes that made Little Miss Sunshine feel like an overlong sitcom. 103 min. NNNN (NW) Varsity, Yonge &amp; Dundas 24

row) can’t really compete with the headier, more thoughtful lo-fi sci-fi of Another Earth and Sound Of My Voice. But as a hipster rom-com about people trying to shake off their pasts to make present-day connections, it’s pretty satisfying until the overreaching ending. 94 min. NNN (NW) Carlton Cinema, Yonge &amp; Dundas 24