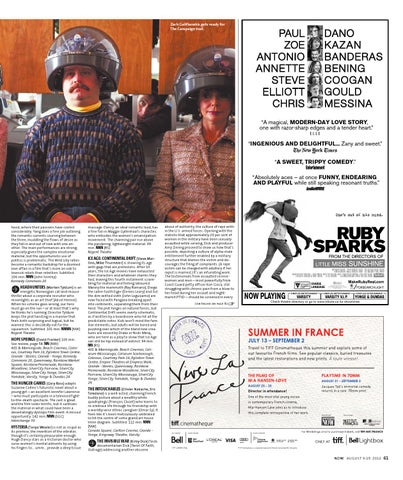 Zach Galifianakis gets ready for The Campaign trail.

“A magical, MODERN-DAY LOVE STORY,’ .”one with razor-sharp edges and a tender heart.” “INGENIOUS AND DELIGHTFUL... Zany and sweet.”

hood, where their passions have cooled considerably. Yang does a fine job outlining the romantic currents coursing between the three, muddling the flows of desire as they fall in and out of love with one another. The main performances are strong, especially given the complex emotional material, but the opportunistic use of politics is problematic. The Wild Lilly rallies become a romantic backdrop for a doomed love affair in a film that’s more an ode to lovesick rebels than rebellion. Subtitled. 106 min. NNN (John Semley) Kennedy Commons 20

HeadHuNters (Morten Tyldum) is an

energetic Norwegian cat-and-mouse thriller about a corporate recruiter who moonlights as an art thief (Aksel Hennie). When his scheme goes wrong, our hero must go on the run – or at least that’s why he thinks he’s running. Director Tyldum keeps the plot twisting in a manner that feels both surprising and logical, but be warned: this is decidedly not for the squeamish. Subtitled. 101 min. NNNN (NW) Regent Theatre

tino, Mike Thurmeier) is showing its age with gags that are prehistoric. After 10 years, the Ice Age movies have exhausted their characters and whatever charms they had, leaving this fourth instalment scrambling for material and feeling laboured. Manny the mammoth (Ray Romano), Diego the sabre-tooth tiger (Dennis Leary) and Sid the dim-witted sloth (John Leguizamo) are now faced with Pangaea breaking apart into continents, separating them from their herd. The plot hinges on natural forces, but Continental Drift seems overly schematic, as if written by a boardroom who hit all the predictable notes. Kids won’t mind the familiar elements, but adults will be bored and puzzling over which of the bland new creatures are voiced by Drake or Nicki Minaj, who are here as a ploy to show that Ice Age can still be hip instead of extinct. 94 min. NN (RS) 401 &amp; Morningside, Beach Cinemas, Coliseum Mississauga, Coliseum Scarborough, Colossus, Courtney Park 16, Eglinton Town Centre, Empire Theatres at Empress Walk, Grande - Steeles, Queensway, Rainbow Promenade, Rainbow Woodbine, SilverCity Fairview, SilverCity Mississauga, SilverCity Yonge, SilverCity Yorkdale, Yonge &amp; Dundas 24

abuse of authority, the culture of rape within the U.S. armed forces. Opening with the statistic that approximately 20 per cent of women in the military have been sexually assaulted while serving, Dick and producer Amy Ziering proceed to show us how that’s possible, depicting a culture of alpha-male entitlement further enabled by a military structure that blames the victim and discourages the filing of complaints. (A rape victim can be charged with adultery if her rapist is married.) It’s an infuriating work. The testimonials from assaulted servicewomen and men – most powerfully from Coast Guard petty officer Kori Cioca, still struggling with chronic pain from a blow to her head during her assault and nightmarish PTSD – should be screened in every continued on page 62 œ

Check theatre directory or go to www.tribute.ca for showtimes