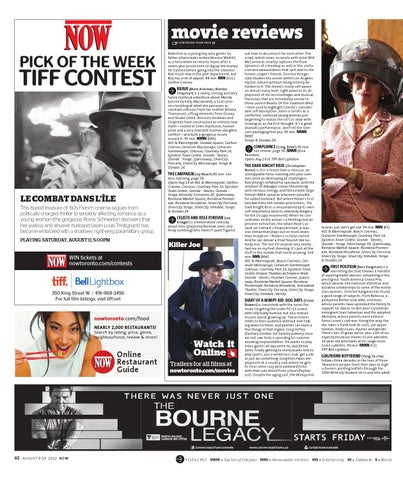 Rolleston as a young boy who greets his father (charismatic writer/director Waititi) as a hero when he returns home after a seven-year prison term to dig up the money he stashed before going into the slammer. Not much new in the plot department, but Boy has a lot of appeal. 88 min. NNN (SGC) Carlton Cinema

her jealous abusive husband (Jean-Louis Trintignant) has nearly 2,000and restaurants!

Watch it Online Trailers for all films at

Nolan) is less a movie than a colossus, an unstoppable force crashing into your summer, bent on destroying all challengers. Everything’s inflated for spectacle, with the simplest of dialogue scenes thrumming with nervous energy, and filmed with largeformat IMAX cameras wherever possible for added bombast. But where Nolan’s first two Bat-films felt nimble and restless, The Dark Knight Rises is encumbered by its own self-importance (and its unwieldy allegory for the Occupy movement). When he concentrates on the action – a thrilling mid-air prisoner extraction, the villain Bane’s assault on Gotham’s financial heart, a massive climax that plays out on more levels than Inception – Nolan is in total control. And he can deliver a final flourish like nobody else. The last 30 seconds very nearly had me on my feet cheering. It’s just all the stuff in the middle that needs pruning. 164 min. NNN (NW) 401 &amp; Morningside, Beach Cinemas, Coliseum Mississauga, Coliseum Scarborough, Colossus, Courtney Park 16, Eglinton Town Centre, Empire Theatres at Empress Walk, Grande - Steeles, Humber Cinema, Queensway, Rainbow Market Square, Rainbow Promenade, Rainbow Woodbine, Scotiabank Theatre, SilverCity Fairview, SilverCity Yonge, SilverCity Yorkdale, Varsity

out how to disconnect for each other. The script, which Jones co-wrote with actor Will McCormack, smartly captures the fluid dynamics of a breakup as well as the confusion and awkwardness that spill over to the former couple’s friends. Director Krieger slyly situates the action within Los Angeles hipster culture without being entirely beholden to it. The movie’s nicely self-aware on almost every level, right down to its deployment of slo-mo montages and musical flourishes that are remarkably similar to those used in Beasts Of The Southern Wild – here used to highlight Celeste’s considerable self-absorption. Jones is terrific as a conflicted, confused young woman just beginning to realize she isn’t as okay with moving on as she first thought. It’s a great dramatic performance; don’t let the romcom packaging fool you. 93 min. NNNN (NW) Yonge &amp; Dundas 24

Bowers) is consistent with the series formula, targeting the under PG-13 crowd with silly kiddy humour but also mature lessons about growing up. These movies relate to their audience without ever talking down to them, and parents can learn a few things in that regard. Greg Hefley (Zachary Gordon, hit hard by puberty since we last saw him) is spending his summer avoiding responsibilities. He wants to play video games all day while his dad (Steve Zahn, finally getting to shine) wants him to play sports, join a wilderness club, get a job or just do something. Greg then fakes employment at a country club where he gets to steal some cozy (and awkward) time with that cute blond from school (Peyton List). Despite the aging cast, the Wimpy Kid

(Bess Kargman) is a nail-biting doc that follows a handful of aspiring ballet dancers competing in the prestigious Youth America Grand Prix, which awards international attention and lucrative scholarships to some of the worldclass winners. Director Kargman has found a good range of subjects, from Rebecca, a pampered Barbie look-alike, and Aran, whose parents have uprooted the family to support his dance, to dirt-poor Colombian immigrant Joan Sebastian and the adopted Michaela, whose parents were killed in Sierra Leone’s civil war. Along the way, the doc takes a frank look at costs, job opportunities, body issues, injuries and gender. There’s lots of great dance, plus a bit of unexpected humour thanks to one adorable 10-year-old who balks at his stage mom. Some subtitles. 90 min. NNNN (GS) TIFF Bell Lightbox

follows three decades in the lives of three Taiwanese people, from their days as high schoolers printing leaflets through the 1990 Wild Lily Student sit-in and into adult-