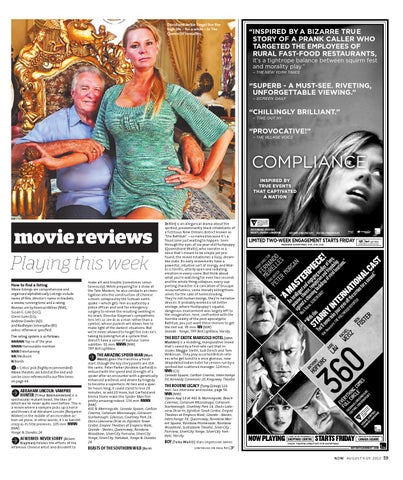 David and Jackie Siegel live the high life – for a while – in The Queen Of Versailles.

“INSPIRED BY A BIZARRE TRUE STORY OF A PRANK CALLER WHO TARGETED THE EMPLOYEES OF RURAL FAST-FOOD RESTAURANTS,

COMPLIANCE INSPIRED BY TRUE EVENTS THAT CAPTIVATED A NATION

Movie theatres are listed at the end and can be cross-referenced to our film times on page 66.

spectacular mutant beast, the likes of which we’ve never quite seen before. This is a movie where a vampire picks up a horse and throws it at Abraham Lincoln (Benjamin Walker) in the middle of an incredible ac­ tion set piece; in other words, it’s as batshit crazy as its title promises. 105 min. nnnn (NW) Yonge &amp; Dundas 24

make art and trouble (sometimes simul­ taneously). While preparing for a show at the Tate Modern, he also conducts an inves­ tigation into the construction of Chinese schools collapsed by the Sichuan earth­ quake – which gets him assaulted by a police officer and sent for emergency surgery to relieve the resulting swelling in his brain. Director Klayman’s sympathetic lens lets us see Ai as a man rather than a symbol, whose puckish wit allows him to make light of the darkest situations. But we’re never allowed to forget the risks he’s taking by poking fun at a system that doesn’t have a sense of humour. Some subtitles. 91 min. nnnn (NW) TIFF Bell Lightbox

beAStS of the Southern WiLd (Benh

How to find a listing

Zeitlin) is an allegorical drama about the spirited, predominantly black inhabitants of a fictitious New Orleans district known as “the Bathtub” – so named because it’s a flood zone just waiting to happen. Seen through the eyes of six­year­old Hushpuppy (Quvenzhané Wallis), who narrates in a voice that’s meant to be simple yet pro­ found, the movie establishes a hazy, dream­ like state. Its early movements have a powerful, intuitive sort of energy, and Wal­ lis is terrific, utterly open and radiating emotion in every scene. But think about what you’re watching for even two seconds and the whole thing collapses; every sup­ porting character is a caricature of brusque resourcefulness, some literally killing them­ selves for the sake of homesteading. They’re not human beings, they’re narrative devices. It probably worked a lot better onstage, where Hushpuppy’s squalid, dangerous environment was largely left to the imagination; here, confronted with the horrible reality of the post­apocalyptic Bathtub, you just want these morons to get the hell out. 93 min. nn (NW) Grande - Yonge, TIFF Bell Lightbox, Varsity