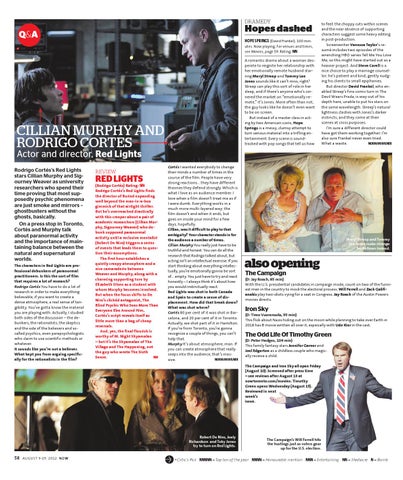 A romantic drama about a woman desperate to reignite her relationship with her emotionally remote husband starring Meryl Streep and Tommy Lee Jones sounds like it can’t miss, right? Streep can play this sort of role in her sleep, and if there’s anyone who’s cornered the market on “emotionally remote,” it’s Jones. More often than not, the guy looks like he doesn’t even want to be on screen. But instead of a master class in acting by two American icons, Hope Springs is a messy, clumsy attempt to turn serious material into a trifling entertainment. Every scene is soundtracked with pop songs that tell us how

to feel; the choppy cuts within scenes and the near absence of supporting characters suggest some heavy editing in post-production. Screenwriter Vanessa Taylor’s resumé includes two episodes of the wrenching HBO series Tell Me You Love Me, so this might have started out as a heavier project. And Steve Carell is a nice choice to play a marriage counsellor; he’s patient and kind, gently nudging his clients to small epiphanies. But director David Frankel, who enabled Streep’s fine comic turn in The Devil Wears Prada, is way out of his depth here, unable to put his stars on the same wavelength. Streep’s natural lightness clashes with Jones’s darker instincts, and they come at their scenes at cross purposes. I’m sure a different director could have got them working together; I’m also sure Frankel never even tried. NormaN WilNer What a waste.

Actor and director, Red Lights Rodrigo Cortés’s Red Lights stars Cillian Murphy and Sigourney Weaver as university researchers who spend their time proving that most supposedly psychic phenomena are just smoke and mirrors – ghostbusters without the ghosts, basically. On a press stop in Toronto, Cortés and Murphy talk about paranormal activity and the importance of maintaining balance between the natural and supernatural worlds. The characters in Red Lights are professional debunkers of paranormal practitioners. Is this the sort of film that requires a lot of research? Rodrigo Cortés You have to do a lot of research in order to make everything believable, if you want to create a dense atmosphere, a real sense of tangibility. You’ve gotta know the material you are playing with. Actually, I studied both sides of the discussion – the debunkers, the rationalists, the skeptics and the side of the believers and socalled psychics, even parapsychologists who claim to use scientific methods or whatever. It sounds like you’re not a believer. What kept you from arguing specifically for the rationalists in the film?

(Rodrigo Cortés) Rating: NN Rodrigo Cortés’s Red Lights finds the director of Buried expanding well beyond the man-in-a-box gimmick of that airtight thriller. But he’s overreached drastically with this creeper about a pair of academic researchers (Cillian Murphy, Sigourney Weaver) who debunk supposed paranormal activity until a reclusive mentalist (Robert De Niro) triggers a series of events that leads them to question their assumptions. The first hour establishes a quietly creepy atmosphere and a nice camaraderie between Weaver and Murphy, along with a charming supporting turn by Elizabeth Olsen as a student with whom Murphy becomes involved. But when the focus shifts to De Niro’s clichéd antagonist, The Blind Psychic Who Sees More Than Everyone Else Around Him, Cortés’s script reveals itself as little more than a bag of cheap reversals. And, yes, the final flourish is worthy of M. Night Shyamalan – but it’s the Shyamalan of The Village and The Happening, not the guy who wrote The Sixth NW Sense.

Cortés I wanted everybody to change their minds a number of times in the course of the film. People have very strong reactions... they have different theories they defend strongly. Which is what I love as an audience member. I love when a film doesn’t treat me as if I were dumb. Everything works in a much more multi-layered way; the film doesn’t end when it ends, but goes on inside your mind for a few days, hopefully. Cillian, was it difficult to play to that ambiguity? Your character stands in for the audience a number of times. Cillian Murphy You really just have to be truthful and honest. You can do all the research that Rodrigo talked about, but acting isn’t an intellectual exercise. If you start thinking about everything intellectually, you’re emotionally gonna be sort of… empty. You just have to try and react honestly – I always think it’s about how you would instinctually react. Red Lights was shot in both Canada and Spain to create a sense of displacement. How did that break down? What was shot where? Cortés 80 per cent of it was shot in Barcelona, and 20 per cent of it in Toronto. Actually, we shot part of it in Hamilton. If you’re from Toronto, you’re gonna recognize a couple of things, you can’t help that. Murphy It’s about atmosphere, man. If you can create atmosphere that really seeps into the audience, that’s masNormaN WilNer sive.

(D: Jay Roach, 85 min) With the U.S. presidential candidates in campaign mode, count on two of the funniest men in the country to mock the electoral process. Will Ferrell and Zach Galifianakis play two idiots vying for a seat in Congress. Jay Roach of the Austin Powers movies directs.

Iron Sky (D: Timo Vuorensola, 93 min) This flick about Nazis hiding out on the moon while planning to take over Earth in 2018 has B movie written all over it, especially with Udo Kier in the cast.

The Campaign’s Will Ferrell hits the hustings just as voters gear up for the U.S. election.