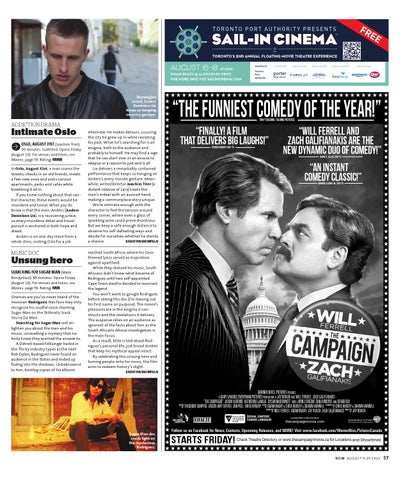 In Oslo, August 31st, a man roams the streets, checks in on old friends, meets a few new ones and visits various apartments, parks and cafĂŠs while breathing it all in. If you knew nothing about that central character, these events would be mundane and trivial. What you do know is that the man, Anders (Anders Danielsen Lie), is a recovering junkie, so every mundane detail and trivial pursuit is anchored in both hope and dread. Anders is on one-day leave from a rehab clinic, visiting Oslo for a job

Unsung hero SEARCHING FOR SUGAR MAN (Malik Bendjelloul). 85 minutes. Opens Friday (August 10). For venues and times, see Movies, page 59. Rating: NNN Chances are youâ&amp;#x20AC;&amp;#x2122;ve never heard of the musician Rodriguez. Nas fans may only recognize his soulful voice chanting Sugar Man on the Stillmatic track Youâ&amp;#x20AC;&amp;#x2122;re Da Man. Searching for Sugar Man will enlighten you about the man and his music, unravelling a mystery that nobody knew they wanted the answer to. A Detroit-based folksinger hailed in the 70s by industry types as the next Bob Dylan, Rodriguez never found an audience in the States and ended up fading into the shadows. Unbeknownst to him, bootleg copies of his albums

interview. He makes detours, scouring the city he grew up in while revisiting his past. What heâ&amp;#x20AC;&amp;#x2122;s searching for is an enigma, both to the audience and probably to himself. He may find a sign that he can start over or an excuse to relapse or a reason to just end it all. Lie delivers a remarkably contained performance that keeps us hanging on Andersâ&amp;#x20AC;&amp;#x2122;s every minute gesture. Meanwhile, writer/director Joachim Trier (a distant relative of Lars) treats the manâ&amp;#x20AC;&amp;#x2122;s ordeal with an assured hand, making a commonplace story unique. Weâ&amp;#x20AC;&amp;#x2122;re intimate enough with the character to feel the tension around every corner, where even a glass of sparkling wine could prove disastrous. But we keep a safe enough distance to observe his self-defeating ways and decide for ourselves whether he stands RADHEYAN SIMONPILLAI a chance.