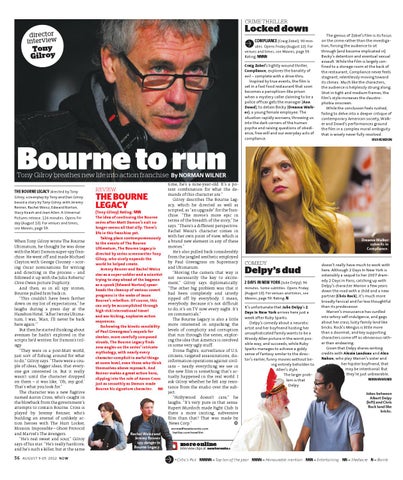 Craig Zobel’s tightly wound thriller, Compliance, explores the banality of evil – complete with a drive-thru. Inspired by true events, the film is set in a fast food restaurant that soon becomes a panopticon-like prison when a mystery caller claiming to be a police officer gets the manager (Ann Dowd), to detain Becky (Dreama Walker), a young female employee. The situation rapidly worsens, throwing us into the dark corners of the human psyche and raising questions of obedience, free will and our everyday acts of compliance.

The genius of Zobel’s film is its focus on the crime rather than the investigation, forcing the audience to sit through (and become implicated in) Becky’s detention and eventual sexual assault. While the film is largely confined to a storage room at the back of the restaurant, Compliance never feels stagnant, relentlessly moving toward its climax. Much like the characters, the audience is helplessly strung along. Shot in tight and medium frames, the film’s style increases the claustrophobia onscreen. While the conclusion feels rushed, failing to delve into a deeper critique of contemporary American society, Walker and Dowd’s performances ground the film in a complex moral ambiguity that is wisely never fully resolved. KIVA REARDON

When Tony Gilroy wrote The Bourne Ultimatum, he thought he was done with the Matt Damon super-spy franchise. He went off and made Michael Clayton with George Clooney – scoring Oscar nominations for writing and directing in the process – and followed it up with the Julia Roberts/ Clive Owen picture Duplicity. And then, as in all spy stories, Bourne pulled him back in. “This couldn’t have been farther down on my list of expectations,” he laughs during a press day at the Hazelton Hotel. “After I wrote Ultimatum, I was, ‘Man, I’ll never be back here again.’” But then he started thinking about avenues he hadn’t explored in the scripts he’d written for Damon’s trilogy. “They were in a post-Matt world, just sort of fishing around for what to do,” Gilroy says. “There were a couple of ideas, bigger ideas, that everyone got interested in. But it really wasn’t until the character dropped on them – it was like, ‘Oh, my god.’ That’s what you look for.” The character was a new fugitive named Aaron Cross, who’s caught in the blowback from the government’s attempts to contain Bourne. Cross is played by Jeremy Renner, who’s building an arsenal of unlikely action heroes with The Hurt Locker, Mission: Impossible – Ghost Protocol and Marvel’s The Avengers. “He’s real sweet and sour,” Gilroy says of his star. “He’s really hardcore, and he’s such a killer, but at the same

(Tony Gilroy) Rating: NNN The idea of continuing the Bourne series after Matt Damon’s exit no longer seems all that silly. There’s life in this franchise yet. Taking place contemporaneously to the events of The Bourne Ultimatum, The Bourne Legacy is directed by series screenwriter Tony Gilroy, who nicely expands the world he helped create. Jeremy Renner and Rachel Weisz star as a super-soldier and a scientist trying to stay ahead of the bagmen as a spook (Edward Norton) spearheads the cleanup of various covert programs in the wake of Jason Bourne’s rebellion. Of course, this can only be accomplished through high-risk international travel and ass-kicking, explosive action sequences. Eschewing the kinetic sensibility of Paul Greengrass’s sequels for sleeker, more carefully composed visuals, The Bourne Legacy finds new angles on the series’ intricate mythology, with nearly every character complicit in awful things at some level, even those who think themselves above reproach. And Renner makes a great action hero, slipping into the role of Aaron Cross just as smoothly as Damon made Bourne his signature character. NW

time, he’s a nine-year-old. It’s a potent combination for what the demands of this character are.” Gilroy describes The Bourne Legacy, which he directed as well as scripted, as “an upgrade” for the franchise. “The movie’s more epic in terms of the breadth of the story,” he says. “There’s a different perspective. Rachel Weisz’s character comes in with her own point of view, which is a brand new element in any of these movies.” He’s also pulled back considerably from the jangled aesthetic employed by Paul Greengrass on Supremacy and Ultimatum. “Moving the camera that way is not necessarily the key to excitement,” Gilroy says diplomatically. “The other big problem was that it had been completely and utterly ripped off by everybody. I mean, everybody. Because it’s not difficult to do, it’s on TV now every night. It’s on commercials.” The Bourne Legacy is also a little more interested in unpacking the levels of complicity and corruption that run through the series, exploring the idea that America is involved in some very ugly stuff. Drone flights, surveillance of U.S. citizens, targeted assassinations, disinformation operations against civilians – nearly everything we see in the new film is something that’s actually happened in the real world. I ask Gilroy whether he felt any resistance from the studio over the subject. “Hollywood doesn’t care,” he laughs. “It’s very pure in that sense. Rupert Murdoch made Fight Club. Is there a more inciting, subversive film than that? That was made by News Corp.” 3

It’s unfortunate that Julie Delpy’s 2 Days In New York arrives here just a week after Ruby Sparks. Delpy’s comedy about a neurotic artist and her boyfriend hosting her unsophisticated family wants to be a Woody Allen picture in the worst possible way, and succeeds, while Ruby Sparks manages to achieve a giddy sense of fantasy similar to the director’s earlier, funny movies without being entirely beholden to Allen’s style. The larger problem is that Delpy

doesn’t really have much to work with here. Although 2 Days In New York is ostensibly a sequel to her 2007 dramedy 2 Days In Paris, catching up with Delpy’s character Marion a few years down the road with a child and a new partner (Chris Rock), it’s much more broadly farcical and far less thoughtful than its predecessor. Marion’s insouciance has curdled into whiny self-indulgence, and gags about her crass, lusty family land like bricks. Rock’s Mingus is little more than a doormat, and key supporting characters come off as obnoxious rather than endearing. Given that Delpy shares writing credits with Alexia Landeau and Alex Nahon, who play Marion’s sister and her hipster boyfriend, that may be intentional. But they’re just unbearable. NORMAN WILNER