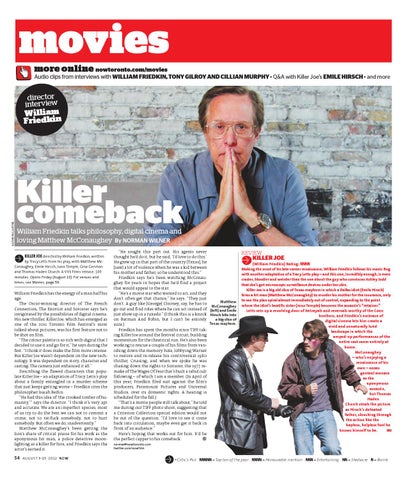 William Friedkin has the energy of a man half his age. The Oscar-winning director of The French Connection, The Exorcist and Sorcerer says he’s invigorated by the possibilities of digital cinema. His new thriller, Killer Joe, which has emerged as one of the 2011 Toronto Film Festival’s most talked-about pictures, was his first feature not to be shot on film. “The colour palette is so rich with digital that I decided to use it and go for it,” he says during the fest. “I think it does make the film more intense. But Killer Joe wasn’t dependent on the new technology. It was dependent on story, character and casting. The camera just enhanced it all.” Describing the flawed characters that populate Killer Joe – an adaptation of Tracy Letts’s play about a family entangled in a murder scheme that just keeps getting worse – Friedkin cites the philosopher Isaiah Berlin. “He had this idea of ‘the crooked timber of humanity,’” says the director. “I think it’s very apt and accurate. We are an imperfect species; most of us try to do the best we can not to commit a crime, not to rat-fuck somebody, not to hurt somebody. But often we do, inadvertently.” Matthew McConaughey’s been getting the lion’s share of critical praise for his work as the eponymous hit man, a police detective moonlighting as a killer for hire, and Friedkin says the actor’s earned it.

“He sought this part out. His agents never thought he’d do it, but he said, ‘I’d love to do this.’ He grew up in that part of the country [Texas], he [saw] a lot of violence when he was a kid between his mother and father, so he understood this.” Friedkin says he’s been watching McConaughey for years in hopes that he’d find a project that would appeal to the star. “He’s a movie star who wanted to act, and they don’t often get that chance,” he says. “They just Matthew don’t. A guy like [George] Clooney, say, he has to McConaughey go out and find roles where he can act instead of (left) and Emile just show up in a tuxedo.” (I think this is a knock Hirsch bite into a big slice of on Batman And Robin, but I can’t be entirely Texas mayhem. sure.) Friedkin has spent the months since TIFF taking Killer Joe around the festival circuit, building momentum for the theatrical run. He’s also been working to rescue a couple of his films from vanishing down the memory hole, lobbying Warner to restore and re-release his controversial 1980 thriller, Cruising, and when we spoke he was chasing down the rights to Sorcerer, the 1977 remake of The Wages Of Fear that’s built a rabid cult following – of which I am a member. (In April of this year, Friedkin filed suit against the film’s producers, Paramount Pictures and Universal Studios, over its domestic rights. A hearing is scheduled for the fall.) “That’s a movie people still talk about,” he told me during our TIFF photo shoot, suggesting that a Criterion Collection special edition would not be out of the question. “I’d love to see it come back into circulation, maybe even get it back in front of an audience.” Here’s hoping that works out for him. It’d be the perfect capper to his comeback. 3

(William Friedkin) Rating: NNNN Making the most of his late-career renaissance, William Friedkin follows his manic Bug with another adaptation of a Tracy Letts play – and this one, incredibly enough, is even crazier, bloodier and weirder than the one about the guy who convinces Ashley Judd that she’s got microscopic surveillance devices under her skin. Killer Joe is a big old slice of Texas mayhem in which a Dallas idiot (Emile Hirsch) hires a hit man (Matthew McConaughey) to murder his mother for the insurance, only to see the plan spiral almost immediately out of control, expanding to the point where the idiot’s beatific sister (Juno Temple) becomes the assassin’s “retainer.” Letts sets up a revolving door of betrayals and reversals worthy of the Coen brothers, and Friedkin’s embrace of digital cinema lets him create a vivid and unnaturally lurid landscape in which the amped-up performances of the entire cast seem entirely at home. McConaughey – who’s enjoying a renaissance of his own – oozes genteel menace as the eponymous assassin, but Thomas Haden Church steals the picture as Hirsch’s defeated father, slouching through the action like the hapless, helpless fool he NW knows himself to be.