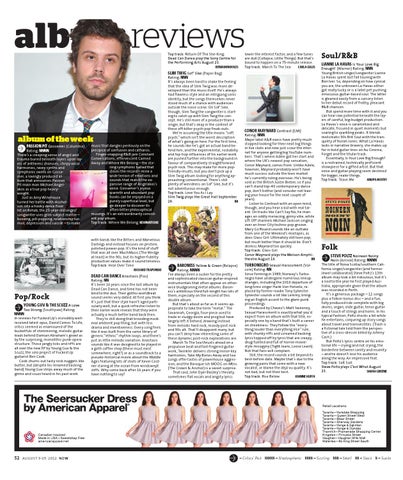 lower the interest factor, and a few tunes are dull (Collapse, Little Things). But that’s bound to happen on a 75-minute release. Top track: March To The Sea CARLA GILLIS

album of the week

music that dangles perilously on the precipice of confusion and catharsis. Finger-snapping R&amp;B jam Constant Conversations, effervescent Carried Away and Where We Belong – the stirring symphonic ballad that closes the record – mine a wide terrain of emotions and sounds that match the expansive range of Angelakos’s voice. Gossamer’s joyous warmth and abundant pop hooks can be enjoyed on a purely superficial level, but go deeper to discover its often bitter philosophical musings. It’s an extraordinarily consistent pop album. Top track: Where We Belong KEVIN RITCHIE

with bands like the Bitters and Marvelous Darlings and instead focuses on pristine, polished power-pop. It’s the kind of stuff that was all over MuchMusic (The Wedge at least) in the 90s, but its higher-fidelity production values make it sound timeless. Top track: Heal Over Time RICHARD TRAPUNSKI

A Love Too Strong (Southpaw) Rating:

In reviews for Fucked Up’s incredibly wellreceived latest opus, David Comes To Life, critics seemed as enamoured of the bucketfuls of shimmering, melodic guitar leads behind Damian Abraham’s growl as by the surprising, monolithic punk-opera structure. Those jangly licks and riffs are all over the new EP by Young Guv &amp; the Scuzz, the solo project of Fucked Up guitarist Ben Cook. Cook churns out tasty rock nuggets like butter, but (despite his renamed backing band) Young Guv strips away much of the grime and scuzz heard in his past work

DEAD CAN DANCE Anastasis (Pias) Rating: NN It’s been 16 years since the last album by Dead Can Dance, and time has not been kind to the duo. Their gothic-worldbeat sound seems very dated. At first you think it’s just that their style hasn’t aged particularly well, but a quick refresher listen to their earlier work reveals that they were actually a much better band back then. They’re still doing that brooding medieval ambient pop thing, but with less drama and inventiveness. Every song feels like it was built from the same library of generic “ethnic” rhythm loops, and there’s just as little melodic variation. Anastasis sounds like it was designed to be played in a goth coffee shop (these must exist somewhere, right?) or as a soundtrack to a pseudo-historical movie about the Middle Ages featuring lots of shots of Kevin Costner staring at the ocean from windswept cliffs. Why come back after 16 years if you have nothing to say?

Rating: NNN It’s always been hard to shake the feeling that the idea of Slim Twig was more developed than the music itself. He’s always had flawless style and an intriguing sonic identity, but the songs themselves never stood much of a chance with audiences outside the noise scene. On Sof’ Sike, though, Slim Twig the songwriter is starting to catch up with Slim Twig the concept. He’s still more of a producer than a singer, but that’s okay in the context of these off-kilter psych-pop freak-outs. We’re assuming the title means “soft psych,” which isn’t the worst description of what’s going on here. For the first time, he sounds like he’s got an actual band behind him, and the experimental, rockabilly and hip-hop influences of his earlier work are pushed further into the background in favour of comparatively straightforward psych rock. This may make for more popfriendly results, but you don’t pick up a Slim Twig album looking for anything approaching conventional. There’s still plenty of weirdness on Sof’ Sike, but it’s not adventurous enough. Top track: Love You As I Lay Slim Twig plays the Great Hall September 28. BB

Rating: NNN Major label A&amp;R execs have pretty much stopped looking for their next big things in live clubs and now just scour the internet for anyone getting big YouTube numbers. That’s where Adele got her start and where the UK’s newest pop sensation, Conor Maynard, comes from. Unlike Adele, however, Maynard probably won’t have much success outside the teen market he’s currently ruling overseas. He’s being sold as the British Justin Bieber, so if you can’t stand top-40 contemporary dance pop, don’t bother (and consider not leaving your house for the next couple of years). Listen to Contrast with an open mind, though, and you hear a kid with real talent. On tracks like Can’t Say No, he manages an oddly menacing, grimy vibe, while Lift Off channels Michael Jackson singing over an Inner City techno-pop groove. Mary Go Round sounds like an outtake from one of the Weeknd’s mixtapes, as does Glass Girl. Ultimately still teen pop, but much better than it should be. Don’t dismiss Maynard too quickly. Top track: Glass Girl Conor Maynard plays the Molson Amphitheatre August 16. BB

TURBONEGRO Sexual Harassment (Volcom) Rating: NN Since forming in 1989, Norway’s Turbonegro have undergone numerous lineup changes, including the 2010 departure of long-time singer Hank Von Helvete, replaced by former roadie Tony Sylvester. Sylvester sounds a lot like Lemmy, bringing an English accent to the glam-punk proceedings. Produced by Chavez’s Matt Sweeney, Sexual Harassment is exactly what you’d expect from an album with that title, especially one by a band that’s built a career on cheekiness. They follow the “everything louder than everything else” rule, with chunky riffs and screamed backing lyrics topped off by lyrics that are creepy, drug-fuelled and full of horror-moviestyle misogyny (Tight Jeans, Loose Leash). Not that fans will complain. Still, the record sounds a bit beyond its best-before date. Maybe that’s due to the growing pains that come with a new vocalist, or blame the déjà vu quality. It’s not bad, but not their best. Top track: Rise Below JOANNE HUFFA

Yellow &amp; Green (Relapse) Rating: I’ve always been a sucker for the pretty and sophisticated classical-guitar-inspired instrumentals that often appear on otherwise bludgeoning metal albums. Baroness’s ambitious third full-length has lots of them, especially on the second of this double album. But that’s about as far as it seems appropriate to take the term “metal.” The Savannah, Georgia, four-piece used to trade in sludgy doom and prog but have largely left it behind, drawing instead from melodic hard rock, moody post rock and 90s alt. That’ll disappoint many, but you can’t deny how interesting some of these dynamic post-rock explorations are. March To The Sea thrusts ahead on a propulsive beat and fast-fingered guitar work, Twinkler delivers stirring minor-key harmonies, Take My Bones Away and Sea Lungs offer tastes of powerhouse aggression, and the Baroque-ish MOOG on Mtns. (The Crown &amp; Anchor) is a sweet surprise. That said, John Dyer Baizley’s throaty, sometimes flat vocals and angsty lyrics

LIANNE LA HAVAS Is Your Love Big Enough? (Warner) Rating: NNN Young British singer/songwriter Lianne La Havas spent last fall touring with Bon Iver. So, depending on how cynical you are, the unknown La Havas either got really lucky or is a label pet pushing innocuous guitar-based soul. The latter is gleaned easily from a cursory listen to her debut record of frothy, pleasant R&amp;B chanson. But spend more time with it and you can hear raw potential beneath the layers of careful, big-budget production. La Havas’s voice is caramelized and delicate, fissured in quiet moments but soaring to sparkling peaks. It blends melismatic 90s Brit Soul with the tranquility of Norah Jones. What La Havas lacks in narrative bravery, she makes up for in bold guitar lines on Au Cinema, Forget and the titular track. Essentially, Is Your Love Big Enough? is a restrained, technically proficient showpiece for a gifted artist. But that voice and guitar-playing seem destined for bigger, realer things. Top track: Tease Me ANUPA MISTRY

Noineen Noiny Noin (Arrival) Rating: NNNN The title of Nova Scotia/southern California singer/songwriter (and former Jewel collaborator) Steve Poltz’s 13th album may look a bit ridiculous, but it’s a nod to the year he first played Australia, appropriate given that the album was recorded in Perth. It’s a generous package – 12 songs plus a folkier bonus disc – and a fun, fully produced ride complete with big drums, organ, slide guitar, tenor guitar and a touch of strings and horns. In his typical fashion, Poltz shocks a bit while he entertains, conjuring up story songs about travel and transvestites. (Trash is a fictional tale told from the perspective of a cross-dresser killed by Johnny Cash.) But Poltz’s lyrics centre on his emotional life – crying and not crying, the borderline between sanity and insanity – and he doesn’t lose his audience along the way. An impressive feat. Top track: Salt Suit Steve Poltz plays C’est What August 23. SARAH GREENE