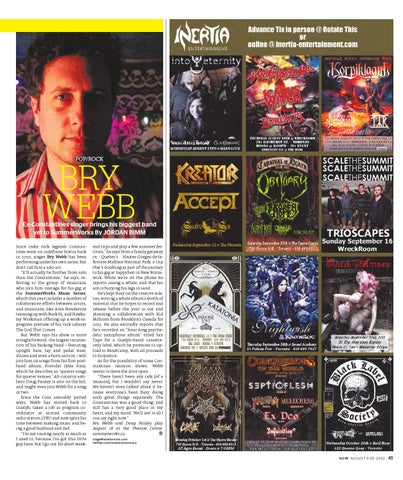 Ex-Constantines singer brings his biggest band yet to SummerWorks By JORDAN BIMM Since indie rock legends Constantines went on indefinite hiatus back in 2010, singer Bry Webb has been performing under his own name, but don’t call him a solo act. “It’ll actually be further from solo than the Constantines,” he says, referring to the group of musicians who join him onstage for his gig at the SummerWorks Music Series, which this year includes a number of collaborative efforts between actors, and musicians, like Ame Henderson teaming up with Buck 65, and Hawksley Workman offering up a work-inprogress preview of his rock cabaret The God That Comes. But Webb says his show is more straightforward; the largest incarnation of his backing band – featuring upright bass, lap and pedal steel, drums and even a horn section – will join him on songs from his first postband album, Provider (Idée Fixe), which he describes as “quieter songs for quieter venues.” Alt-country antihero Doug Paisley is also on the bill, and might even join Webb for a song or two. Since the Cons amicably parted ways, Webb has moved back to Guelph, taken a job as program coordinator at storied community radio station CFRU and now splits his time between making music and being a good husband and dad. “I’m not touring nearly as much as I used to, because I’ve got this little guy here, but I go out for short week-

end trips and play a few summer festivals,” he says from a family getaway in Quebec’s Hautes-Gorges-de-laRivière-Malbaie National Park, a trip that’s doubling as part of the journey to his gig at SappyFest in New Brunswick. While we’re on the phone he reports seeing a whale, and that his son is burying his legs in sand. He’s kept busy on the creative side, too, writing a whole album’s worth of material that he hopes to record and release before the year is out and planning a collaboration with Kid Millions from Brooklyn’s Oneida for 2013. He also excitedly reports that he’s recorded an “hour-long psychedelic saxophone album” titled Sax Tape for a Guelph-based cassetteonly label, which he promises to upload to BandCamp, with all proceeds to Ecojustice. As for the possibility of some Constantines reunion shows, Webb seems to leave the door open. “There hasn’t been any talk [of a reunion], but I wouldn’t say never. We haven’t even talked about it because everyone’s been busy doing such great things separately. The Constantines was a good thing, and still has a very good place in my heart, and my mind. ‘We’ll see’ is all I can say right now.” Bry Webb and Doug Paisley play August 18 at the Theatre Centre. summerworks.ca 3 stage@nowtoronto.com twitter.com/nowtorontomusic