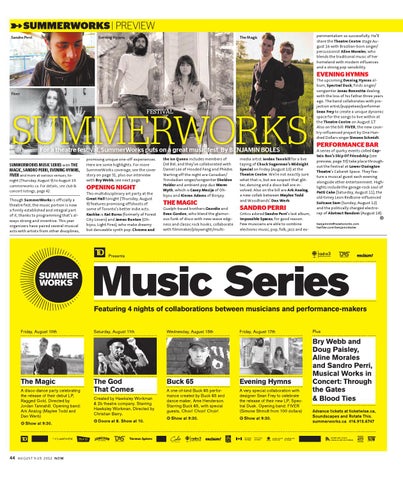 perimentalism so successfully. He’ll share the Theatre Centre stage August 16 with Brazilian-born singer/ percussionist Aline Morales, who blends the traditional music of her homeland with modern influences and a strong pop sensibility.

For a theatre festival, SummerWorks puts on a great music fest By BENJAMIN BOLES

Though SummerWorks is officially a theatre fest, the music portion is now a firmly established and integral part of it, thanks to programming that’s always strong and inventive. This year organizers have paired several musical acts with artists from other disciplines,

promising unique one-off experiences. Here are some highlights. For more SummerWorks coverage, see the cover story on page 31, plus our interview with Bry Webb, see next page.

the Ice Queen includes members of Del Bel, and they’ve collaborated with Daniel Lee of Hooded Fang and Phèdre. Starting off the night are Canadian/ Trinidadian singer/songwriter Sheldon Holder and ambient pop duo Warm Myth, which is Casey Mecija of Ohbijou and Kieran Adams of Bonjay.

Guelph-based brothers Geordie and Evan Gordon, who blend the glamorous funk of disco with new-wave edginess and classic rock hooks, collaborate with filmmaker/playwright/multi-

media artist Jordan Tannhill for a live taping of Chuck Sugarman’s Midnight Special on Friday (August 10) at the Theatre Centre. We’re not exactly sure what that is, but we suspect that glitter, dancing and a disco ball are involved. Also on the bill are Ark Analog, a new collab between Maylee Todd and Woodhands’ Dan Werb.

The upcoming Evening Hymns album, Spectral Dusk, finds singer/ songwriter Jonas Bonnetta dealing with the loss of his father three years ago. The band collaborates with projection artist/puppeteer/performer Sean Frey to create a unique dynamic space for the songs to live within at the Theatre Centre on August 17. Also on the bill: FIVER, the new country-influenced project by One Hundred Dollars singer Simone Schmidt.