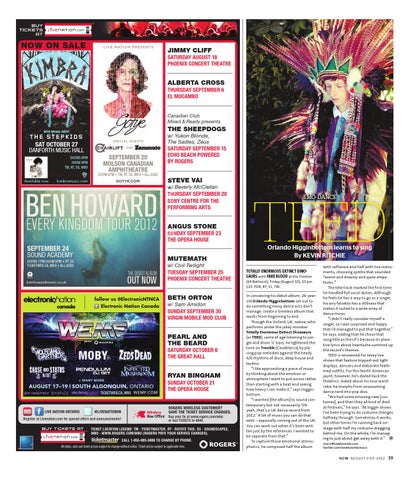 PEARL AND THE BEARD SATURDAY OCTOBER 6 THE GREAT HALL

Register at Livenation.com for special offers and announcements!

SUNDAY OCTOBER 21 THE OPERA HOUSE ROGERS WIRELESS CUSTOMER? SAVE THE TICKET SERVICE CHARGES. Buy your tix at www.rogers.com/wbo or text TICKETS to 4849.

In conceiving his debut album, 26-yearold Orlando Higginbottom set out to do something many dance acts don’t manage: create a timeless album that works from beginning to end. Though the Oxford, UK, native, who performs under the jokey moniker Totally Enormous Extinct Dinosaurs (or TEED), came of age listening to jungle and drum ’n’ bass, he lightened the tone on Trouble (Casablanca) by placing pop melodies against the heady 4/4 rhythms of disco, deep house and techno. “I like approaching a piece of music by thinking about the emotion or atmosphere I want to put across rather than starting with a beat and seeing how heavy I can make it,” says Higginbottom. “I wanted [the album] to sound contemporary but not necessarily ‘Oh yeah, that’s a UK dance record from 2012.’ A lot of music you can do that with – especially coming out of the UK. You can work out when it’s been written just by the references. I wanted to be separate from that.” To capture those emotional atmospherics, he composed half the album

with software and half with live instruments, choosing synths that sounded “warm and dreamy and quite empathetic.” The title track marked the first time he handled full vocal duties. Although he feels he has a way to go as a singer, his airy falsetto has a stillness that makes it suited to a wide array of dance music. “I didn’t really consider myself a singer, so I was surprised and happy that I’d managed to put that together,” he says, adding that he chose that song title as the LP’s because its plaintive lyrics about heartache summed up the record’s themes. TEED is renowned for ravey live shows that feature tripped-out light displays, dancers and elaborate feathered outfits. For this North American jaunt, however, he’s dialed back the theatrics. Asked about his tour wardrobe, he morphs from unassuming dance nerd into pop diva. “We had some amazing new [costumes], and then they all kind of died at festivals,” he says. “At bigger shows I’ve been trying to do costume changes halfway through. Sometimes it works, but other times I’m running back onstage with half my costume dragging behind me. On the whole, I’m managing to just about get away with it.” 3 music@nowtoronto.com twitter.com/nowtorontomusic