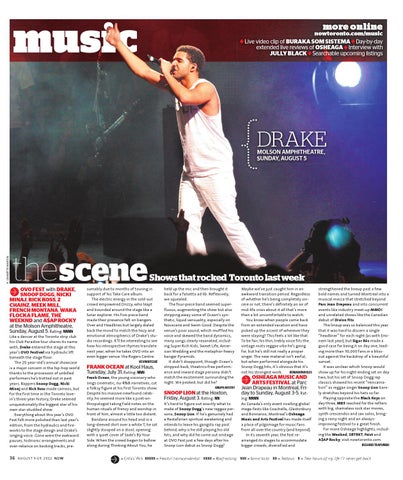 the scene OVO FEST with DRAKE,

Like a dancer at the Toronto strip club his Club Paradise tour shares its name with, Drake entered the stage at this year’s OVO Festival via hydraulic lift beneath the stage floor. The 25-year-old’s annual showcase is a major concern in the hip-hop world thanks to the procession of unbilled performers he’s trotted out in past years. Rappers Snoop Dogg, Nicki Minaj and Rick Ross made cameos, but for the first time in the Toronto lovein’s three-year history, Drake seemed unquestionably the biggest star of his own star-studded show. Everything about this year’s OVO Fest felt more polished than last year’s edition, from the hydraulics and fireworks to the stage design and Drake’s singing voice. Gone were the awkward pauses, histrionic arrangements and over-reliance on backing tracks, pre-

sumably due to months of touring in support of his Take Care album. The electric energy in the sold-out crowd empowered Drizzy, who leapt and bounded around the stage like a lunar explorer. His five-piece band made their presence felt on bangers Over and Headlines but largely dialed back the mood to match the hazy and emotional atmospherics of Drake’s studio recordings. It’ll be interesting to see how his introspective rhymes translate next year, when he takes OVO into an even bigger venue: the Rogers Centre. KEVIN RITCHIE

Frank Ocean, the young visionary who sings cinematic, nu-R&amp;B narratives, cut a folksy figure at his first Toronto show. Despite his massive newfound celebrity, he seemed more like a poet-anthropologist taking field notes on the human rituals of frenzy and worship in front of him, almost a little too distant. Bandana around his head and in a long-sleeved shirt over a white T, he sat slightly stooped on a stool, opening with a quiet cover of Sade’s By Your Side. When the crowd began to bellow along during Thinking About You, he

held up the mic and then brought it back for a falsetto ad lib. Reflexively, we squealed. The four-piece band seemed superfluous, augmenting the show but also stripping away some of Ocean’s synthetic, liquid sensuality, especially on Novacane and Swim Good. Despite the venue’s poor sound, which muffled his voice and skewed the band dynamics, many songs clearly resonated, including Super Rich Kids, Sweet Life, American Wedding and the metaphor-heavy banger Pyramids. It didn’t disappoint, though Ocean’s stripped-back, theatrics-free performance and inward stage persona didn’t match the excitement surrounding the night. We peaked, but did he? ANUPA MISTRY

It’s hard to figure out exactly what to make of Snoop Dogg’s new reggae persona, Snoop Lion. If he’s genuinely had a Rastafarian spiritual awakening and intends to leave his gangsta rap past behind, why is he still playing his old hits, and why did he come out onstage at OVO Fest just a few days after his Snoop Lion debut as Snoop Dogg?

Maybe we’ve just caught him in an awkward transition period. Regardless of whether he’s being completely sincere or not, there’s definitely an air of mid-life crisis about it all that’s more than a bit uncomfortable to watch. You know when people come back from an extended vacation and have picked up the accent of wherever they were staying? This feels a lot like that. To be fair, his thin, trebly voice fits the vintage roots reggae vibe he’s going for, but he’s still not really a proper singer. The new material isn’t awful, but when performed alongside his Snoop Dogg hits, it’s obvious that it’s BENJAMIN BOLES not his strongest work.

day to Sunday, August 3-5. Rating: NNNN As Canada’s only event rivalling global mega-fests like Coachella, Glastonbury and Bonnaroo, Montreal’s Osheaga Music and Arts Festival has made itself a place of pilgrimage for music fans from all over the country (and beyond). In its seventh year, the fest rearranged its stages to accommodate bigger crowds, diversified and

strengthened the lineup past a few bold names and turned Montreal into a musical mecca that stretched beyond Parc Jean Drapeau and into concurrent events like industry meet-up MMOI and unrelated shows like the Canadian debut of Divine Fits. The lineup was so balanced this year that it was hard to discern a single “headliner” for each night (as with Eminem last year), but Sigur Rós made a good case for being it on day one, leading more than 30,000 fans in a blissout against the backdrop of a beautiful sunset. It was unclear which Snoop would show up for his night-ending set on day two, but his set of Snoop Dogg rap classics showed his recent “reincarnation” as reggae singer Snoop Lion barely stretches beyond his hats so far. Playing opposite the Black Keys on day three, M83 reached for the rafters with big, shameless rock star moves, synth crescendos and sax solos, bringing a rainy night and an alwaysimproving festival to a great finish. For more Osheaga highlights, including the Weeknd, SBTRKT, Feist and A$AP Rocky, visit nowtoronto.com. RICHARD TRAPUNSKI