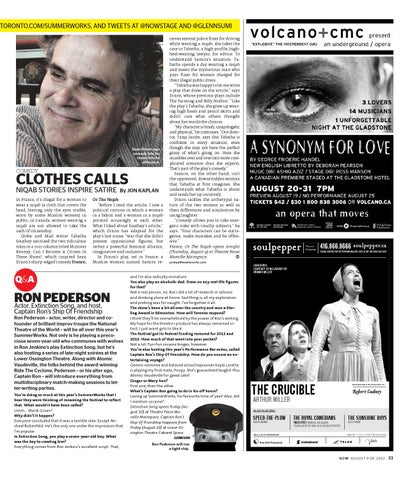 Clothes Calls niqAb StORiES inSpiRE SAtiRE In France, it’s illegal for a woman to wear a niqab (a cloth that covers the head, leaving only the eyes visible, worn by some Muslim women) in public; in Canada, women wearing a niqab are not allowed to take the oath of citizenship. Globe and Mail writer Tabatha Southey satirized the two ridiculous rules in a 2011 column titled Minister Kenney, Can I Become A Citizen In These Shoes?, which inspired Sean Dixon’s sharp-edged comedy France,

Or The Niqab. “Before I read the article, I saw a political cartoon in which a woman in a bikini and a woman in a niqab pointed accusingly at each other. What I liked about Southey’s article,” which Dixon has adapted for the play’s last scene, “was that she didn’t present oppositional figures, but rather a powerful feminist alliance, imaginative and inclusive.” In Dixon’s play, set in France, a Muslim woman named Samira re-

Ron Pederson – actor, writer, director and cofounder of brilliant improv troupe the National Theatre of the World – will be all over this year’s SummerWorks. Not only is he playing a precocious seven-year-old who communes with wolves in Ron Jenkins’s play Extinction Song, but he’s also hosting a series of late-night soirées at the Lower Ossington Theatre. Along with Atomic Vaudeville, the folks behind the award-winning Ride The Cyclone, Pederson – or his alter ego, Captain Ron – will introduce everything from multidisciplinary match-making sessions to letter-writing parties. You’re doing so much at this year’s SummerWorks that I hear they were thinking of renaming the festival to reflect that. What would it have been called? Umm... Mardi Groan? Why didn’t it happen? Everyone concluded that it was a terrible idea. Except Michael Rubenfeld. He’s the only one under the impression that I’m popular. In Extinction Song, you play a seven-year-old boy. What was the key to creating him? Everything comes from Ron Jenkins’s excellent script. That,

ceives several police fines for driving while wearing a niqab; she takes the case to Tabatha, a high-profile, highheel-wearing lawyer, for advice. To understand Samira’s situation, Tabatha spends a day wearing a niqab and meets the mysterious man who pays fines for women charged for their illegal public dress. “Tabatha was happy to let me write a play that drew on the article,” says Dixon, whose previous plays include The Painting and Billy Nothin’. “Like the play’s Tabatha, she grew up wearing high heels and pencil skirts and didn’t care what others thought about her wardrobe choices. “My character is brash, unapologetic and physical,” he continues. “Our director, Tanja Jacobs, says this Tabatha is confident in every situation, even though she may not have the perfect grasp of what’s going on. Here she stumbles over and over into more complicated scenarios than she expects. That’s part of the play’s comedy.” Samira, on the other hand, isn’t the oppressed, downtrodden woman that Tabatha at first imagines. She understands what Tabatha is about and sends her up incisively. Dixon tackles the archetypal nature of the two women as well as their differences and similarities by using laughter. “Comedy allows you to take energetic risks with touchy subjects,” he says. “Your characters can be outrageous, make mistakes and be offensive.” France, Or The Niqab opens tonight (Thursday, August 9) at Theatre Passe Muraille Mainspace. 3 jonkap@nowtoronto.com

and I’m also radically immature. You also play an alcoholic dad. Draw on any real-life figures for that? Not a real person, no. But I did a lot of research in saloons and drinking alone at home. Sad thing is, all my exploration and probing was for naught. I’ve forgotten it all. The show’s been a hit all over the country and won a Sterling Award in Edmonton. How will Toronto respond? I think they’ll be overwhelmed by the power of Ron’s writing. My hope for the theatre I produce has always remained intact: I just want girls to like it. The festival got its federal funding restored for 2012 and 2013. How much of that went into your pocket? Not a lot. Fun-fun cocaine binges, however. You’re also hosting this year’s Performance Bar series, called Captain Ron’s Ship Of Friendship. How do you ensure an entertaining voyage? Gemini nominee and beloved actor/improviser Kayla Lorette is playing my first mate, Poopy. She’s guaranteed laughs! Plus Atomic Vaudeville for gawd sake! Ginger or Mary Ann? First one, then the other. What’s Captain Ron going to do in his off hours? Loving up SummerWorks, his favourite time of year! Also, did I mention cocaine? Extinction Song opens Friday (August 10) at Theatre Passe Muraille Mainspace; Captain Ron’s Ship Of Friendship happens from Friday (August 10) at Lower Ossington Theatre Cabaret Space. GLENN SUMI