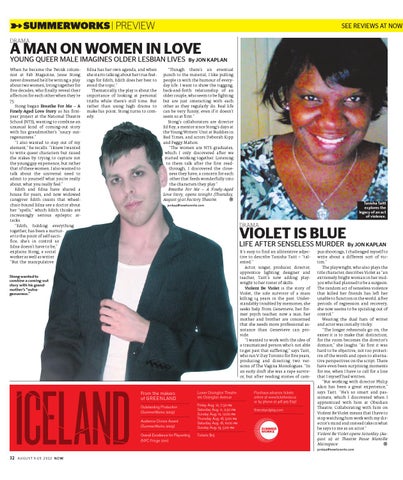 a man on women in loVe young queer male imagines older lesbian lives When he became the Twink columnist at Fab Magazine, Jesse Stong never dreamed he’d be writing a play about two women, living together for five decades, who finally reveal their affection for each other when they’re 75. Stong began Breathe For Me – A Finely-Aged Love Story as his firstyear project at the National Theatre School (NTS), wanting to combine an unusual kind of coming-out story with his grandmother’s “saucy outrageousness.” “I also wanted to step out of my element,” he recalls. “I knew I wanted to write queer characters but raised the stakes by trying to capture not the young gay experience, but rather that of these women. I also wanted to talk about the universal need to admit to yourself what you’re really about, what you really feel.” Edith and Edna have shared a house for years, and now widowed caregiver Edith insists that wheelchair-bound Edna see a doctor about her “spells,” which Edith thinks are increasingly serious epileptic attacks. “Edith, holding everything together, has been a nurturer to the point of self-sacrifice; she’s in control so Edna doesn’t have to be,” explains Stong, a social worker as well as writer. “But the manipulative

Edna has her own agenda, and when she starts talking about her true feelings for Edith, Edith does her best to avoid the topic.” Thematically, the play is about the importance of looking at personal truths while there’s still time. But rather than using high drama to make his point, Stong turns to comedy.

“Though there’s an eventual punch to the material, I like pulling people in with the humour of everyday life. I want to show the tugging, back-and-forth relationship of an older couple, who seem to be fighting but are just interacting with each other as they regularly do. Real life can be very funny, even if it doesn’t seem so at first.” Stong’s collaborators are director Ed Roy, a mentor since Stong’s days at the Young Writers’ Unit at Buddies in Bad Times, and actors Deborah Kipp and Peggy Mahon. “The women are NTS graduates, which I only discovered after we started working together. Listening to them talk after the first readthrough, I discovered the closeness they have, a concern for each other that feeds wonderfully into the characters they play.” Breathe For Me – A Finely-Aged Love Story, opens tonight (Thursday, August 9) at Factory Theatre. 3

Tanisha Taitt explores the legacy of an act of violence.

Violet is blue life after senseless murder It’s easy to find an alliterative adjective to describe Tanisha Taitt – “talented.” Actor, singer, producer, director, apprentice lighting designer and teacher, Taitt’s now adding playwright to her roster of skills. Violent Be Violet is the story of Violet, the sole survivor of a mass killing 14 years in the past. Understandably troubled by memories, she seeks help from Genevieve, her former psych teacher, now a nun; her mother and brother are concerned that she needs more professional assistance than Genevieve can provide. “I wanted to work with the idea of a traumatized person who’s not able to get past that suffering,” says Taitt, who ran V-Day Toronto for five years, producing and directing two versions of The Vagina Monologues. “In an early draft she was a rape survivor, but after reading stories of cam-

Stong wanted to combine a coming-out story with his grandmother’s “outrageousness.”

Purchase advance tickets online at www.ticketwise.ca or by phone at 416 915 6747 theicelandplay.com

pus shootings, I challenged myself to write about a different sort of victim.” The playwright, who also plays the title character, describes Violet as “an extremely bright woman in her mid30s who had planned to be a surgeon. The random act of senseless violence that killed her friends has left her unable to function in the world. After periods of regression and recovery, she now seems to be spiraling out of control.” Wearing the dual hats of writer and actor was initially tricky. “The longer rehearsals go on, the easier it is to make that distinction, for the room becomes the director’s domain,” she laughs. “At first it was hard to be objective, not too protective of the words and open to alternative perspectives on the script. There have even been surprising moments for me, when I have to call for a line that I myself had written. “But working with director Philip Akin has been a great experience,” says Taitt. “He’s so smart and passionate, which I discovered when I apprenticed with him at Obsidian Theatre. Collaborating with him on Violent Be Violet means that I have to stop watching him work with my director’s mind and instead take in what he says to me as an actor.” Violent Be Violet opens Saturday (August 11) at Theatre Passe Muraille Mainspace. 3 jonkap@nowtoronto.com