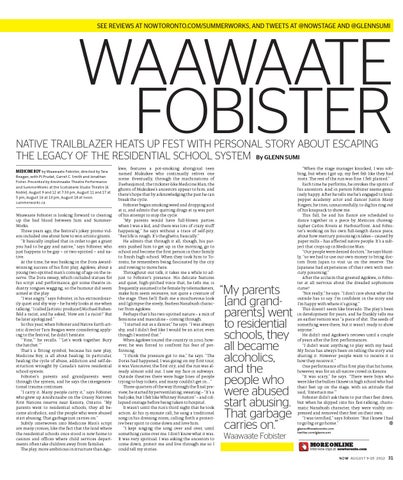 NATIVE TRAILBLAZER HEATS UP FEST WITH PERSONAL STORY ABOUT ESCAPING THE LEGACY OF THE RESIDENTIAL SCHOOL SYSTEM By GLENN SUMI MEDICINE BOY by Waawaate Fobister, directed by Tara Beagan, with PJ Prudat, Garret C. Smith and Jonathan Fisher. Presented by Anishnaabe Theatre Performance and SummerWorks at the Scotiabank Studio Theatre (6 Noble). August 9 and 12 at 7:30 pm, August 11 and 17 at 5 pm, August 16 at 10 pm, August 18 at noon. summerworks.ca.

Waawaate Fobister is looking forward to clearing up the bad blood between him and SummerWorks. Three years ago, the festival’s jokey promo videos included one about how to win artistic grants. “It basically implied that in order to get a grant you had to be gay and native,” says Fobister, who just happens to be gay – or two-spirited – and native. At the time, he was basking in the Dora Awardwinning success of his first play, Agokwe, about a young two-spirited man’s coming of age on the reserve. The Dora sweep, which included statues for his script and performance, got some theatre industry tongues wagging, so the humour did seem aimed at the play. “I was angry,” says Fobister, in his extraordinarily quiet and shy way – he barely looks at me when talking. “I called [artistic producer] Michael Rubenfeld a racist, and he asked, ‘How am I a racist?’ But he later apologized.” So this year, when Fobister and Native Earth artistic director Tara Beagan were considering applying to the festival, he didn’t hesitate. “‘Fine,’” he recalls. “‘Let’s work together. Bury the hatchet.’” That’s a fitting symbol, because his new play, Medicine Boy, is all about healing. In particular, healing the cycle of abuse, addiction and self-destruction wrought by Canada’s native residential school system. Fobister’s parents and grandparents went through the system, and he says the intergenerational trauma continues. “I carry it. Many people carry it,” says Fobister, who grew up Anishinaabe on the Grassy Narrows First Nations reserve near Kenora, Ontario. “My parents went to residential schools, they all became alcoholics, and the people who were abused start abusing. That garbage just carries on.” Subtly interwoven into Medicine Man’s script are many ironies, like the fact that the land where the residential schools once stood is now home to casinos and offices where child services departments often take children away from families. The play, more ambitious in structure than Ago-

kwe, features a pot-smoking aboriginal teen named Mukukee who continually relives one scene. Eventually, through the machinations of Daebaujimod, the trickster-like Medicine Man, the ghosts of Mukukee’s ancestors appear to him, and there’s hope that by acknowledging the past he can break the cycle. Fobister began smoking weed and dropping acid at 11, and admits that quitting drugs at 19 was part of his attempt to stop the cycle. “My parents would have full-blown parties when I was a kid, and there was lots of crazy stuff happening,” he says without a trace of self-pity. “Rez life is rough. It’s the ghetto, basically.” He admits that through it all, though, his parents pushed him to get up in the morning, go to school and become the first person in their family to finish high school. When they took him to Toronto, he remembers being fascinated by the city and vowing to move here. Throughout our talk, it takes me a while to adjust to Fobister’s presence. His delicate features and quiet, high-pitched voice that, he tells me, is frequently assumed to be female by telemarketers, make him seem recessive, not quite a creature of the stage. Then he’ll flash me a mischievous look and I glimpse the steely, fearless Nanabush character from Agokwe. Perhaps that’s his two-spirited nature – a mix of feminine and masculine – coming through. “I started out as a dancer,” he says. “I was always shy, and I didn’t feel like I would be an actor, even though I wanted that.” When Agokwe toured the country in 2010, however, he was forced to confront his fear of performing. “I think the pressure got to me,” he says. “The Doras had happened, I was going on my first tour, it was Vancouver, the first city, and the run was already almost sold out. I saw my face in subways. Outside theatres there were huge lines of people trying to buy tickets, and many couldn’t get in….” Three-quarters of the way through the final preview, he started hyperventilating, sweating – “It’s a bad joke, but I felt like Whitney Houston” – and collapsed onstage before being taken to hospital. It wasn’t until the run’s third night that he took action. At his 15-minute call, he sang a traditional song in his dressing room, calling forth a protective bear spirit to come down and love him. “I kept singing the song over and over, until something came over me. I don’t know what it was. It was very spiritual. I was asking the ancestors to come down, protect me and live through me so I could tell my stories.

“My parents [and grandparents] went to residential schools, they all became alcoholics, and the people who were abused start abusing. That garbage carries on.” Waawaate Fobister

“When the stage manager knocked, I was sobbing, but when I got up, my feet felt like they had roots. The rest of the run was fine. I felt planted.” Each time he performs, he invokes the spirits of his ancestors. And in person Fobister seems genuinely happy. After he tells me he’s engaged to Soulpepper Academy actor and dancer Justin Many Fingers, he tries, unsuccessfully, to dig his ring out of his knapsack to show me. This fall, he and his fiancé are scheduled to dance together in a piece by Mexican choreographer Carlos Rivera at Harbourfront. And Fobister’s working on his own full-length dance piece, about how mercury poisoning in lakes – caused by paper mills – has affected native people. It’s a subject that crops up in Medicine Man. “Our people were denied doctors,” he says bluntly, “so we had to use our own money to bring doctors from Japan to visit us on the reserve. The Japanese had experiences of their own with mercury poisoning.” After the acclaim that greeted Agokwe, is Fobister at all nervous about the dreaded sophomore curse? “Not really,” he says. “I don’t care about what the outside has to say. I’m confident in the story and I’m happy with where it’s going.” This doesn’t seem like bravado. The play’s been in development for years, and he frankly tells me an earlier version was “a piece of shit. The seeds of something were there, but it wasn’t ready to show anyone.” He didn’t read Agokwe’s reviews until a couple of years after the first performances. “I didn’t want anything to play with my head. My focus has always been on telling the story and sharing it. However people want to receive it is how they receive it.” One performance of his first play that hit home, however, was for an all-native crowd in Kenora. “It was scary,” he says. “There were boys who were like the bullies I knew in high school who had their feet up on the stage, with an attitude that said, ‘Entertain me.’” Fobister didn’t ask them to put their feet down, but when he slipped into his fast-talking, charismatic Nanabush character, they were visibly impressed and removed their feet on their own. “I was terrified,” says Fobister. “But I knew I had to go big or go home.” 3 glenns@nowtoronto.com twitter.com/glennsumi