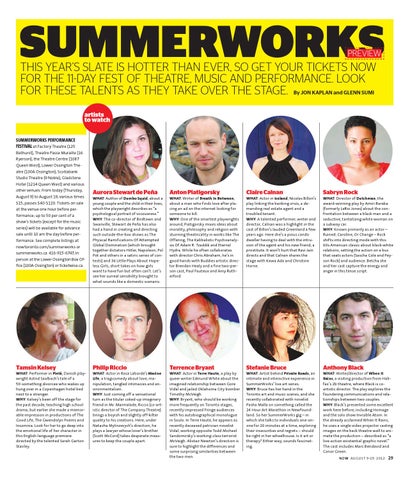 THIS YEAR’S SLATE IS HOTTER THAN EVER, SO GET YOUR TICKETS NOW FOR THE 11-DAY FEST OF THEATRE, MUSIC AND PERFORMANCE. LOOK FOR THESE TALENTS AS THEY TAKE OVER THE STAGE. By JON KAPLAN and GLENN SUMI artists to watch

SUMMERWORKS PERFORMANCE FESTIVAL at Factory Theatre (125 Bathurst), Theatre Passe Muraille (16 Ryerson), the Theatre Centre (1087 Queen West), Lower Ossington Theatre (100A Ossington), Scotiabank Studio Theatre (9 Noble), Gladstone Hotel (1214 Queen West) and various other venues. From today (Thursday, August 9) to August 19, various times. $15, passes $40-$120. Tickets on sale at the venue one hour before performance; up to 50 per cent of a show’s tickets (except for the music series) will be available for advance sale until 10 am the day before performance. See complete listings at nowtoronto.com/summerworks or summerworks.ca. 416-915-6747, in person at the Lower Ossington Box Office (100A Ossington) or ticketwise.ca.

WHAT: Author of Dumbo Squid, about a young couple and the child in their lives, which the playwright describes as “a psychological portrait of viciousness.” WHY: The co-director of Birdtown and Swanville, Stewart de Peña has also had a hand in creating and directing such outside-the-box shows as The Physical Ramifications Of Attempted Global Domination (which brought together dictators Hitler, Napoleon, Pol Pot and others in a satiric series of contests) and 36 Little Plays About Hopeless Girls, short takes on how girls want to have fun but often can’t. Let’s see her surreal sensibility brought to what sounds like a domestic scenario.

WHAT: Writer of Breath In Between, about a man who finds love after placing an ad on the internet looking for someone to kill. WHY: One of the smartest playwrights around, Piatigorsky mixes ideas about morality, philosophy and religion with stunning theatricality in works like The Offering, The Kabbalistic Psychoanalysis Of Adam R. Tzaddik and Eternal Hydra. While he often collaborates with director Chris Abraham, he’s in good hands with Buddies artistic director Brendan Healy and a fine two-person cast, Paul Fauteux and Amy Rutherford.

WHAT: Actor in Iceland, Nicolas Billon’s play linking the banking crisis, a demanding real estate agent and a troubled tenant. WHY: A talented performer, writer and director, Calnan was a highlight in the cast of Billon’s lauded Greenland a few years ago. Here she’s a pious condo dweller having to deal with the intrusion of the agent and his new friend, a prostitute. It won’t hurt that Ravi Jain directs and that Calnan shares the stage with Kawa Ada and Christine Horne.

WHAT: Director of Dutchman, the award-winning play by Amiri Baraka (formerly LeRoi Jones) about the confrontation between a black man and a seductive, tantalizing white woman on a subway car. WHY: Known primarily as an actor – Ruined; Caroline, Or Change – Rock shifts into directing mode with this 60s American classic about black-white relations, setting the action on a bus that seats actors (Sascha Cole and Peyson Rock) and audience. Betcha she and her cast capture the energy and anger in this tense script.

WHAT: Performer in Pietà, Danish playwright Astrid Saalbach’s tale of a 50-something divorcee who wakes up hung over in a Copenhagen hotel bed next to a stranger. WHY: Kelsey’s been off the stage for the past decade, teaching high school drama, but earlier she made a memorable impression in productions of The Good Life, The Gwendolyn Poems and Insomnia. Look for her to go deep into the emotional life of her character in this English-language premiere directed by the talented Sarah Garton Stanley.

WHAT: Actor in Rosa Laborde’s Marine Life, a tragicomedy about love, manipulation, tangled intimacies and environmentalism. WHY: Just coming off a sensational turn as the titular coked-up imaginary friend in Mr. Marmalade, Riccio (co-artistic director of The Company Theatre) brings a boyish and slightly off-kilter quality to his creations. Here, under Natasha Mytnowych’s direction, he plays a lawyer whose lover’s brother (Scott McCord) takes desperate measures to keep the couple apart.

WHAT: Actor in Terre Haute, a play by queer writer Edmund White about the imagined relationship between Gore Vidal and jailed Oklahoma City bomber Timothy McVeigh. WHY: Bryant, who should be working more frequently on Toronto stages, recently impressed Fringe audiences with his autobiographical monologue in Soulo. In Terre Haute, he appears as recently deceased patrician novelist Vidal, working opposite Todd Michael Sandomirsky’s working-class terrorist McVeigh. Alistair Newton’s direction is sure to highlight the differences and some surprising similarities between the two men.

WHAT: Artist behind Private Roads, an intimate and interactive experience in SummerWorks’ live art series. WHY: Bruce has her hand in the Toronto art and music scenes, and she recently collaborated with novelist Pasha Malla on something called the 24 Hour Art Marathon in Newfoundland. So her SummerWorks gig – in which she talks to individuals one-onone for 20 minutes at a time, exploring their insecurities and regrets – should be right in her wheelhouse. Is it art or therapy? Either way, sounds fascinating.

WHAT: Writer/director of When It Rains, a visiting production from Halifax’s 2b theatre, where Black is coartistic director. The play explores the foundering communications and relationships between two couples. WHY: Black’s presented some excellent work here before, including Homage and the solo show Invisible Atom. In the already acclaimed When It Rains, he uses a single video projector casting images on the back theatre wall to animate the production – described as “a live-action existential graphic novel.” The cast includes Marc Bendavid and Conor Green. NOW AUGUST 9-15 2012