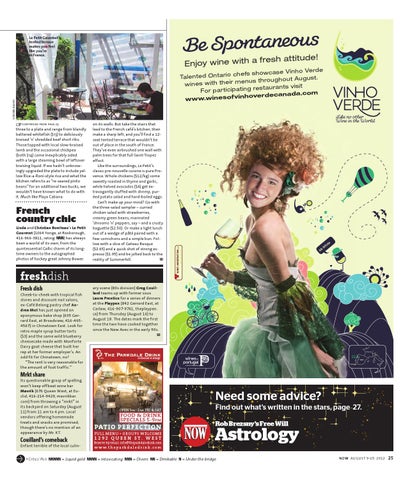 esh at titude! Enjoy wine with a fr

three to a plate and range from blandly battered whitefish ($13) to deliciously braised ’n’ shredded beef short ribs. Those topped with local slow-braised lamb and the occasional chickpea (both $14) come inexplicably sided with a large steaming bowl of leftover braising liquid. If we hadn’t unknowingly upgraded the plate to include yellow Rice-a-Roni-style rice and what the kitchen refers to as “re-seared pinto beans” for an additional two bucks, we wouldn’t have known what to do with it. Much like Playa Cabana.

French country chic Linda and Christian Boniteau’s Le Petit Gourmet (1064 Yonge, at Roxborough, 416-966-3811, rating: NNN) has always been a world of its own, from the quintessential Gallic charm of its longtime owners to the autographed photos of hockey great Johnny Bower

on its walls. But take the stairs that lead to the French café’s kitchen, then make a sharp left, and you’ll find a 12seat tented terrace that wouldn’t be out of place in the south of France. They’ve even airbrushed one wall with palm trees for that full Saint-Tropez effect. Like the surroundings, Le Petit’s classic pre-nouvelle cuisine is pure Provence. Whole chickens ($12/kg) come sweetly roasted in thyme and garlic, while halved avocados ($4) get extravagantly stuffed with shrimp, puréed potato salad and hard-boiled eggs. Can’t make up your mind? Go with the three-salad sampler – curried chicken salad with strawberries, creamy green beans, marinated ’shrooms ’n’ peppers, say – and a crusty baguette ($2.50). Or make a light lunch out of a wedge of pâté paired with a few cornichons and a simple bun. Follow with a slice of Gateau Basque ($2.65) and a quick shot of strong espresso ($1.95) and be jolted back to the SD reality of Summerhill.

Cheek-to-cheek with tropical fish stores and discount nail salons, ex-Café Belong pastry chef Andrea Mut has just opened an eponymous bake shop (635 Gerrard East, at Broadview, 416-4654567) in Chinatown East. Look for retro maple syrup butter tarts ($3) and the same wild blueberry cheesecake made with Monforte Dairy goat cheese that built her rep at her former employer’s. An odd fit for Chinatown, no? “The rent is very reasonable for the amount of foot traffic.”

ary scene (80s division) Greg Couillard teams up with former sous Laura Prentice for a series of dinners at the Playpen (842 Gerrard East, at Carlaw, 416-907-9761, theplaypen. ca) from Thursday (August 16) to August 18. The dates mark the first time the two have cooked together since the New Avec in the early 90s. SD

Its questionable grasp of spelling won’t keep offbeat wine bar Mavrik (676 Queen West, at Euclid, 416-214-9429, mavrikbar. com) from throwing a “mrkt” in its backyard on Saturday (August 11) from 11 am to 4 pm. Local vendors offering homemade treats and snacks are promised, though there’s no mention of an appearance by Mr. KT.

Enfant terrible of the local culin-

Find out what’s written in the stars, page 27. Rob Brezsny’s Free Will