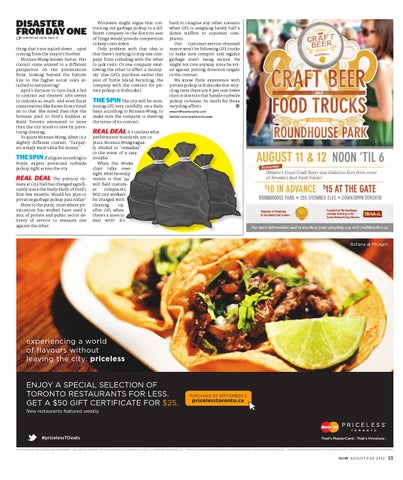 DISASTER FROM DAY ONE œcontinued from page 12

thing-that’s-not-nailed-down spiel coming from the mayor’s brother. Minnan-Wong knows better. Has council come around to a different perspective on the privatization front, looking beyond the bottom line to the higher social costs attached to outsourcing? April’s decision to turn back a bid to contract out cleaners’ jobs seems to indicate as much, and even fiscal conservatives like Karen Stintz voted no to that. She noted then that the bonuses paid to Ford’s buddies at Build Toronto amounted to more than the city stood to save by privatizing cleaning. To quote Minnan-Wong, albeit in a slightly different context, “Taxpayers simply want value for money.”

THE SPIN If all goes according to Hoyle, expect privatized curbside pickup right across the city.

The political climate at City Hall has changed significantly since the hurly-burly of Ford’s first few months. Would his plan to privatize garbage pickup pass today? More to the point, cities where privatization has worked have used a mix of private and public sector delivery of service to measure one against the other.

Privateers might argue that contracting out garbage pickup to a different company in the districts east of Yonge would provide competition to keep costs down. Only problem with that idea is that there’s nothing to stop one company from colluding with the other to jack costs. Or one company swallowing the other to effect a monopoly. (See GFL’s purchase earlier this year of Turtle Island Recycling, the company with the contract for private pickup in Etobicoke.)

THE SPIN The city will be monitoring GFL very carefully, on a daily basis according to Minnan-Wong, to make sure the company is meeting the terms of its contract.

hard to imagine any other scenario when GFL is assigning barely half a dozen staffers to customer complaints. Our customer-service-obsessed mayor won’t be following GFL trucks to make sure compost and regular garbage aren’t being mixed. He might not care anyway, since he voted against putting diversion targets in the contract. We know from experience with private pickup in Etobicoke that recycling rates there are 6 per cent lower than in districts that handle curbside pickup in-house. So much for those recycling efforts. 3 enzom@nowtoronto.com twitter.com/nowtorontonews

REAL DEAL It’s unclear what performance standards are in place. Minnan-Wong vaguely alluded to “remedies” in the event of a catastrophe. When the Works chair talks oversight, what he really means is that 311 will field customer complaints. Will city workers be charged with cleaning up after GFL when there’s a mess to deal with? It’s T:9.833”

experiencing a world of flavours without leaving the city: priceless

enjoy a special selection of toronto restaurants for less. get a $50 gift certificate for $25.