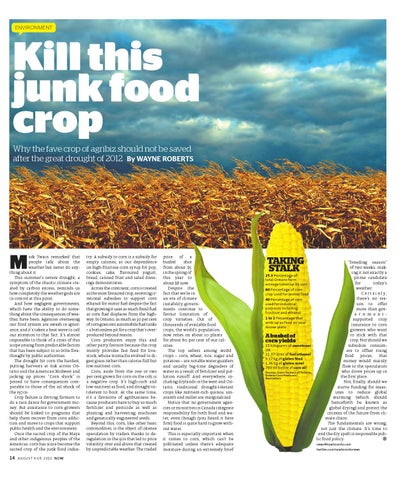 ark Twain remarked that people talk about the weather but never do any­ thing about it. This summer’s severe drought, a symptom of the chaotic climate cre­ ated by carbon excess, reminds us how completely the weather gods are in control at this point. And how negligent governments, which have the ability to do some­ thing about the consequences of wea­ ther, have been. Agencies overseeing our food system are awash in ignor­ ance, and it’s taken a heat wave to call our attention to that fact. It’s almost impossible to think of a crisis of this scope arising from predictable factors that has been subject to so little fore­ thought by public authorities. The drought hit corn the hardest, putting harvests at risk across On­ tario and the American Midwest and jacking up prices. “Corn shock” is poised to have consequences com­ parable to those of the oil shock of the 1970s. Crop failure is driving farmers to do a rain dance for government mo­ ney. But assistance to corn growers should be linked to programs that help them recover from corn addic­ tion and move to crops that support public health and the environment. Once the sacred crop of the Maya and other indigenous peoples of the Americas, corn has since become the sacred crop of the junk food indus­

try. A subsidy to corn is a subsidy for empty calories, as our dependence on high­fructose corn syrup for pop, cookies, cake, flavoured yogurt, bread, canned fruit and salad dress­ ings demonstrates. Across the continent, corn is treated as the most favoured crop, receiving ir­ rational subsidies to support corn ethanol for motor fuel despite the fact that growing it uses as much fossil fuel as corn fuel displaces from the high­ way. In Ontario, as much as 30 per cent of corn goes into automobile fuel tanks – a bottomless pit for a crop that’s over­ produced beyond reason. Corn producers enjoy this and other party favours because the crop mostly provides fast feed for live­ stock, whose stomachs evolved to di­ gest grass rather than calorie­full but low­nutrient corn. Corn, aside from the one or two per cent grown for corn on the cob, is a negative crop. It’s high­carb and low­nutrient as food, and drought­in­ tolerant to boot. At the same time, it’s a favourite of agribusiness be­ cause producers have to buy so much fertilizer and pesticide as well as planting and harvesting machines and genetically engineered seeds. Beyond this, corn, like other basic commodities, is the object of intense speculation by traders thanks to de­ regulation in the 90s that led to price volatility over and above that created by unpredictable weather. The traded

price of a bushel shot from about $5 in the spring of this year to about $8 now. Despite the fact that we’re in an era of climate instability, govern­ ments continue to favour limitation of crop varieties. Out of thousands of available food crops, the world’s population now relies on about 10 plants for about 80 per cent of our cal­ ories. The top sellers among world crops – corn, wheat, rice, sugar and potatoes – are notable water guzzlers and usually big­time degraders of water as a result of fertilizer and pol­ lution runoff. And everywhere, in­ cluding drylands in the west and On­ tario, traditional drought­tolerant crops like nutrient­rich quinoa, am­ aranth and millet are marginalized. Notice that no government agen­ cies or ministries in Canada integrate responsibility for both food and wa­ ter, even though (you heard it here first) food is quite hard to grow with­ out water. This is especially important when it comes to corn, which can’t be pollinated unless there’s adequate moisture during an extremely brief

A bushel of corn yields

“breeding season” of two weeks: mak­ ing it not exactly a prime candidate for today’s weather. C e r t a i n l y, there’s no rea­ son to offer more than gov­ e r n m e n t ­ supported crop insurance to corn growers who want to stick with that crop. Nor should we subsidize consum­ ers to offset rising food prices; that money would mainly flow to the speculators who drove prices up in the first place. Nor, finally, should we starve funding for meas­ ures to reduce global warming (which should henceforth be known as global drying) and protect the citizens of the future from cli­ mate chaos. The fundamentals are wrong, not just the climate. It’s time to end the dry spell in responsible pub­ lic food policy. 3 news@nowtoronto.com twitter.com/nowtorontonews