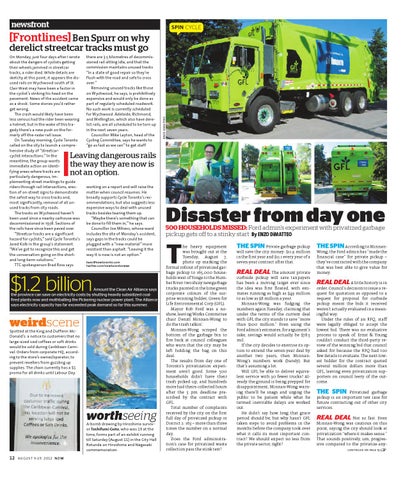 [Frontlines] Ben Spurr on why On Monday, just four days after I wrote about the dangers of cyclists getting their wheels jammed in streetcar tracks, a rider died. While details are sketchy at this point, it appears the disused rails on Wychwood south of St. Clair West may have been a factor in the cyclist’s striking his head on the pavement. News of the accident came as a shock. Some stories you’d rather get wrong. The crash would likely have been less serious had the rider been wearing a helmet, but in the wake of this tragedy there’s a new push on the formerly off-the-radar rail issue. On Tuesday morning, Cycle Toronto called on the city to launch a comprehensive study of “streetcarcyclist interactions.” In the meantime, the group wants immediate action on identifying areas where tracks are particularly dangerous, implementing street markings to guide riders through rail intersections, erection of on-street signs to demonstrate the safest way to cross tracks and, most significantly, removal of all unused tracks from city roads. The tracks on Wychwood haven’t been used since a nearby carhouse was decommissioned in 1978. Sections of the rails have since been paved over. “Streetcar tracks are a significant hazard for cyclists,” said Cycle Toronto’s Jared Kolb in the group’s statement. “We’ve got to recognize this and get the conversation going on the shortand long-term solutions.’’ TTC spokesperson Brad Ross says

there are 3.5 kilometres of decommissioned rail sitting idle, and that the commission maintains unused tracks “in a state of good repair so they’re flush with the road and safe to cross over.’’ Removing unused tracks like those on Wychwood, he says, is prohibitively expensive and would only be done as part of regularly scheduled roadwork. No such work is currently scheduled for Wychwood. Adelaide, Richmond, and Wellington, which also have derelict rails, are all scheduled to be torn up in the next seven years. Councillor Mike Layton, head of the Cycling Committee, says he wants to “go as fast as we can” to get staff

Leaving dangerous rails the way they are now is not an option. working on a report and will raise the matter when council resumes. He broadly supports Cycle Toronto’s recommendations, but also suggests less expensive ways to deal with unused tracks besides tearing them up. “Maybe there’s something that can be done to fill them in,” he says. Councillor Joe Mihevc, whose ward includes the site of Monday’s accident, says gaps in the tracks could be plugged with a “new material” more resistant than asphalt. “Leaving it the way it is now is not an option.” bens@nowtoronto.com twitter.com/nowtorontonews

Spotted at the King and Dufferin McDonald’s: a notice to customers that no large-sized iced coffees or soft drinks would be sold during Caribbean Carnival. Orders from corporate HQ, according to the store’s owner/operator, to prevent revellers from guzzling up supplies. The chain currently has a $1 promo for all drinks until Labour Day.

worthseeing A-bomb drawing by Hiroshima survivor Toshifumi Goto, who was 19 at the time, forms part of an exhibit running till Saturday (August 11) in the City Hall Rotunda on Hiroshima and Nagasaki commemoration.

Disaster from day one 500 HOUSEHOLDS MISSED: Ford admin’s experiment with privatized garbage pickup gets off to a stinky start By ENZO DiMATTEO

he heavy equipment was brought out at the Tuesday, August 7, photo op marking the formal rollout of privatized garbage pickup to 165,000 households west of Yonge to the Humber River: two shiny new garbage trucks painted in the lime green corporate colours of the surprise winning bidder, Green for Life Environmental Corp (GFL). Mayor Rob Ford was a noshow, leaving Works Committee chair Denzil Minnan-Wong to do the trash talkin’. Minnan-Wong scraped the bottom of the garbage bin to fire back at council colleagues who warn that the city may be left holding the bag on this deal. The results from day one of Toronto’s privatization experiment aren’t good. Some 500 households didn’t have their trash picked up, and hundreds more had theirs collected hours after the 5 pm deadline prescribed by the contract with GFL. Total number of complaints received by the city on the first full day of privatized pickup in District 2: 163 – more than three times the number on a normal day. Does the Ford administration’s case for privatized waste collection pass the stink test?

THE SPIN Private garbage pickup will save the city money: $11.9 million in the first year and $11.1 every year of a seven-year contract after that. REAL DEAL The amount private curbside pickup will save taxpayers has been a moving target ever since the idea was first floated, with estimates running as high as $49 million to as low as $8 million a year. Minnan-Wong was fudging the numbers again Tuesday, claiming that under the terms of the current deal with GFL the city stands to save “more than $100 million.” Even using the Ford admin’s estimates, for argument’s sake, savings would actually be $78.5 mil. If the city decides to exercise its option to extend the seven-year deal by another two years, then MinnanWong’s numbers work (barely). But that’s assuming a lot. Will GFL be able to deliver equivalent service with 30 fewer trucks? Already the ground is being prepped for disappointment, Minnan-Wong warning there’ll be snags and urging the public to be patient while what he termed inevitable delays are worked out. He didn’t say how long that grace period should be, but why hasn’t GFL taken steps to avoid problems in the months before the company took over what it calls its most important contract? We should expect no less from the private sector, right?

THE SPIN According to MinnanWong, the Ford admin has “made the financial case” for private pickup – they’ve contracted with the company that was best able to give value for money.

REAL DEAL A little history is in order. Council’s decision to issue a request for quotation as opposed to a request for proposal for curbside pickup meant the bids it received weren’t actually evaluated in a meaningful way. Under the rules of an RFQ, staff were legally obliged to accept the lowest bid. There was no evaluative process to speak of. Ernst &amp; Young couldn’t conduct the third-party review of the winning bid that council asked for because the RFQ had too few details to evaluate. The next-lowest bidder for the contract quoted several million dollars more than GFL, leaving even privatization supporters on council leery of the outcome.

Privatized garbage pickup is an important test case for future contracting out of other city ser vices.

REAL DEAL Not so fast. Even Minnan-Wong was cautious on this point, saying the city should look at privatization “where it makes sense.” That sounds positively, um, progressive compared to the privatize-anycontinued on page 15 œ