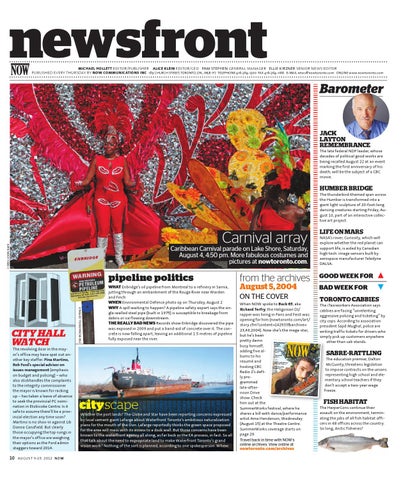 Barometer JACK LAYTON REMEMBRANCE The late federal NDP leader, whose decades of political good works are being recalled August 22 at an event marking the first anniversary of his death, will be the subject of a CBC movie.

HUMBER BRIDGE The thunderbird-themed span across the Humber is transformed into a giant light sculpture of 20-foot-long dancing creatures starting Friday, August 10, part of an interactive collective art project.

When NOW spoke to Buck 65, aka Richard Terfry, the Haligonian DJ/ rapper was living in Paris and Feist was opening for him (nowtoronto.com/art/ story.cfm?content=142933&amp;archive= 23,49,2004). Now she’s the mega-star, but he’s been pretty damn Bruce Nuclear’s burning secrets busy himself, + adding five al+ bums to his resumé and + hosting CBC Radio 2’s deftly programmed ’S AT RE TH OP ID late-afterIPHIC B H P AX M LIF OLY + HA noon Drive show. Check him out at the SummerWorks festival, where he shares a bill with dance/performance artist Ame Henderson, Wednesday (August 15) at the Theatre Centre. SummerWorks coverage starts on page 29. Travel back in time with NOW’s online archives. View online at nowtoronto.com/archives 18

Whither the port lands? The Globe and Star have been reporting concerns expressed by local cement giant Lafarge about Waterfront Toronto’s ambitious naturalization plans for the mouth of the Don. Lafarge reportedly thinks the green space proposed for the area will mess with its access to a dock wall. But those concerns have been known to the waterfront agency all along, as far back as the EA process, in fact. So all that talk about the need to expropriate land to make Waterfront Toronto’s grand vision work? Nothing of the sort is planned, according to one spokesperson. Whew.

The iTaxiworkers Association says cabbies are facing “unrelenting aggressive policing and ticketing” by city cops. According to association president Sajid Mughal, police are writing traffic tickets for drivers who simply pick up customers anywhere other than cab stands.

The revolving door in the mayor’s office may have spat out another key staffer. Pina Martino, Rob Ford’s special adviser on issues management (emphasis on budget and policing) – who also stickhandles the complaints to the integrity commissioner the mayor is known for racking up – has taken a leave of absence to seek the provincial PC nomination in Etobicoke Centre. Is it safe to assume there’ll be a provincial election any time soon? Martino is no shoo-in against Lib Donna Cansfield. But clearly those occupying the top rungs in the mayor’s office are weighing their options as the Ford admin staggers toward 2014.

WHAT Enbridge’s oil pipeline from Montreal to a refinery in Sarnia, jutting through an embankment of the Rouge River near Warden and Finch WHEN Environmental Defence photo op on Thursday, August 2 WHY A spill waiting to happen? A pipeline safety expert says the single-walled steel pipe (built in 1975) is susceptible to breakage from debris or ice flowing downstream. THE REALLY BAD NEWS Records show Enbridge discovered the pipe was exposed in 2009 and put a band-aid of concrete over it. The concrete is now falling apart, leaving an additional 1.5 metres of pipeline fully exposed near the river.

FISH HABITAT The HarperCons continue their assault on the environment, terminating the jobs of all fish habitat officers in 48 offices across the country. So long, Arctic fisheries?